Evelyn Hofer
Early Color Photography
exhibition gallery
Press Release
From June 17 to July 22, 2015, Galerie m Bochum is featuring early color photographs by Evelyn Hofer (b. 1922 in Marburg an der Lahn, d. 2009 in Mexico City), made in connection with her famous photobooks about New York, Washington and Dublin. On view are also pictures of Paris that were not published at that time. The exhibition coincides with a major retrospective of Evelyn Hofer’s work at Villa Stuck in Munich, the first comprehensive showing of the oeuvre of the “most famous ‘unknown’ photographer in America.” (Hilton Kramer). A new monograph is being published for the survey show.

In the 1950s, color photography began to gain in importance as an artistic medium, finally enjoying a true breakthrough in the 1970s. Evelyn Hofer, who lived and worked in New York City starting in the late 1940s, where she began to receive her first commissions from prestigious magazines such as Harper’s Bazaar, experienced the boom in color photography up close on the local scene. She was one of the early adopters of the new technology – most of the images she made for books or magazines in the 1960s are color shots. From that point forward, Hofer increasingly focused on cities and countries as subjects for her photobook projects. Her intense interest in the cultural and social fabric of specific places is reflected in her working methods. In some cases, she lived for several months in the cities she photographed: “I always try to immerse myself in cities I don’t know, just as if I were in fact living there, integrating myself as far as possible into the normal rhythm of life [...].”
In this way, Hofer not only managed to gain the trust of the locals, allowing her to create particularly intimate portraits; she also carefully studied the light, everyday life, architecture and atmosphere in the settings she portrayed, resulting in meticulously composed tableaux. The works merge to generate contexts bespeaking the special features of each place, but are also more than capable of asserting themselves as individual images in which the use of color is a key ingredient in creating a one-of-a-kind impression. To name but two examples, the footballers in “Phoenix Park on a Sunday, Dublin” and the “Girl with Bicycle, Dublin” (both from 1966) both attest to Hofer’s extraordinary eye for the aesthetic qualities of color and are considered icons within her oeuvre.

The dye transfer technique she used still fascinates today with its exceptional intensity. This sophisticated printing process, in which the colors are applied directly to the paper with the help of matrices, has become increasingly rare: the Pan Matrix Film required was developed by Kodak in 1947 and produced only until 1994. 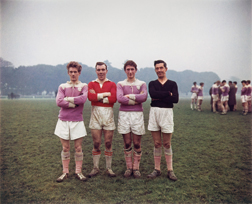 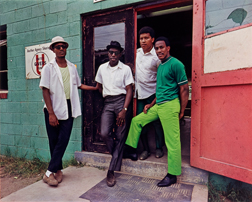