CORRECTIONS
MAN IN THE CENTER (from the series CORRECTIONS)
I. About the text
There is a man. He is in the center. After that, it gets complicated.
First, there’s the problem of the unreliable witness. In this work, the text consists of corrections drawn from The New York Times. So the artwork draws inspiration from – and insistently refers to – failure.
Then there’s the problem of iteration. While each error gives rise to a correction, each correction, in turn, contains the possibility of error. Sometimes, in an effort to correct one mistake, we make another. Sometimes we make the same mistake.
Next is the problem of the missing image. A given correction refers to a person or persons in a photograph. Yet we never see those images. And even if we did, how reliable is the witness borne by the photograph? Or by the painting that refers to that photograph?
Finally, there’s the problem of persistence. The corrections span twenty-four years but, shorn of context, seem to refer to the same person. This is related to an issue in philosophy known as the Persistence Question. Are you the same person you used to be? The same person you might one day become? Does your identity remain identical? Do you, however you do define yourself, persist ?
Here’s what we know about the man in the center: He is not the figure with the cane, the tie, or the hat.
It’s possible that he’s looking at a brochure (unspecified) from the council (unnamed). Or perhaps that’s not the man after all; as the last canvas informs us parenthetically, “Information supplied with the photograph did not identify the man in the center.”

II. About the process
The work in this series is a hybrid of painting and photography. Canvas, historically used for painting, has recently been adapted to digital printing. After printing the text and a field of color, I treat the canvas chemically to facilitate its absorption of the paint, then pour the paint as I once poured chemistry in the darkroom. In this painting, I used two kinds of paint, first a solution containing bone black as the pigment then one containing mica, fusing these earthy, analog materials to the printed canvas. I allow for varation in the pouring process, so the pigment accumulates unevenly, interacting with ambient light in a way that calls to mind the photographic process. For what is a photograph but a representation of light reflecting off the varied surface of the world? The result is a silvery painting in shades of gray that, like a photograph, contains an important element of chance.
Works like MAN IN THE CENTER also trade on the seriality built into the photographic process. My canvases are never exactly the same but nevertheless nearly identical, contained within a frame size that does not vary. In this respect, they’re reminiscent of a roll of film with its negatives of identical size. My serial approach also acknowledges the infinite reproducibility of a given photographic image, whether from negative or digital file. 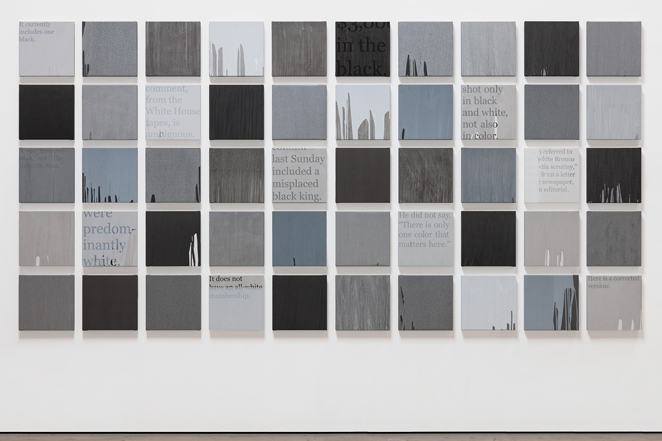 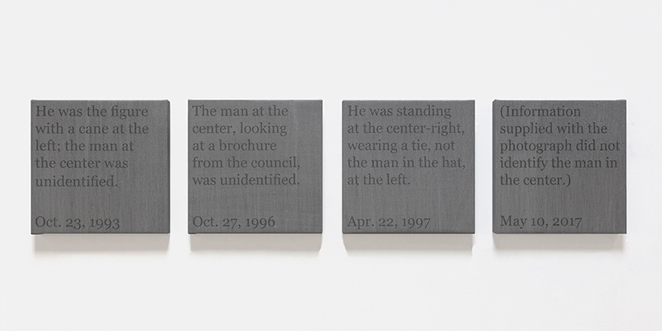