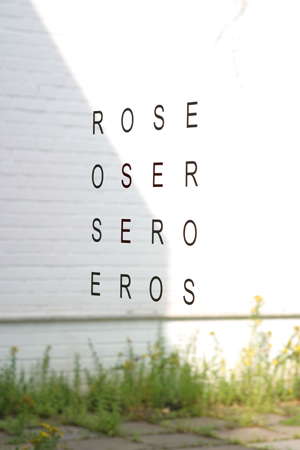 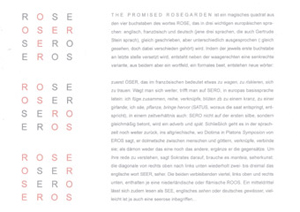 "THE PROMISED ROSEGARDEN is a magic square from the four letters of the word ROSE, that in three languages, English, German, and French (each of which Gertrude Stein also spoke), is written the same, but pronounsced differently (: seen the same, yet simultaneously heard differently). By shifting each of the first letters to the last position, a vertical variant arises perpendicular to the horizontal, from both as a semantic field, formal plot, where new words emerge:

first OSER, which in French means to venture, to risk, to dare. Dare to go further and you'll encounter SERO, in Europe's dundamental language Latin: I join together, string together blossoms e.g., to a wreath, to a garland; I sow, plant, bring forth (SATUS from where the seed, also in a relationship of time: SERA, not stressed on the first syllable, but rather evenly stressed, becomes an adverb and late. Finally it goes back further in the history of language, to ancient Greek, where Plato's Symposium Diotima speaks of EROS, who interprets between mortals and gods; he ties, connects them, bridges the extremes, as a demon, neither one nor the other. In order to understand her speech. Socrates says manteia, prophetiv vision, would be needed: the diagonal from top right to bottom left repeats two to three times the English word SEER, prophet. The two remaining quarters, top left and bottom right, contain a Dutch or Flemisch ROOS. A middle third can be reas SEE, English for vison or German for a body of water, perhaps it can also be seen as a SEEROSE (in German: a water lily)..." (Barbara Köhler)