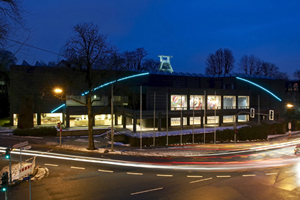 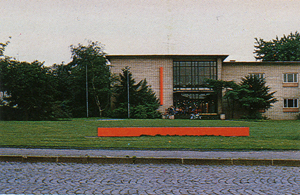 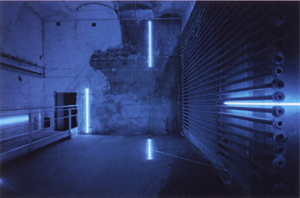 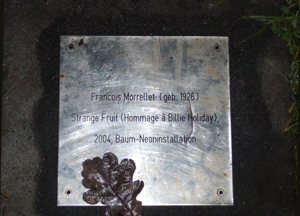 description board to the installation
Since the beginning of 2010, on time for the opening of the year of the cultural capital, François Morellet puts a new accent in Bochum to man-made landscape.For the museum of Bochum he realises a neon work covered on the architecture.désintegration architecturale, works with the front of the museum. A blue neon curve spans the building

TheGrilles déformantes exist of three metal grids in a stand raised. An engine allows to pull together the grids and open again by which they attain alternately a horizontal one or a vertical format which founds itself on a square. "Morellets plays with complicated space experiences"(Max Imdahl, Erläuterungen zur modernen Kunst) and are since 1972 in the possession of the art collections of the Ruhr-University.

Since 1975 the work 4 trames superposées is in the collections of the Ruhr university.The composition of a picture can be deciphered by the viewer only hard. Above all the lines in the picture centre are remarkable. The remaining lines seems random arranged.

In the new building of the situation art in Bochum Weitmar there is a light installation Morellets. The visitor enters a space, in that, apparently arbitrarily, 16 red, curved neon tubes on walls and on the ground are distributed. After a strict chance system the artist has positioned them in the space.The light installation invites the viewer to individual interpretations and associations.

The sculpture on the Springerplatz in Bochum was installed by François Morellet in 1979. The components, two orange beams are 5 metres high in each case. A beam lies horizontally on the meadow, the other is right in vertical adjustment in a building facade in the background. The individual parts stick together in the right angle.If the viewer walks along the levels, he will find out that the vertical comoves in the same tempo. "How a cruise control", François Morellet describes his own work.

The architecture-integrated board picture is refined by the artist so in single segments divide that these form a long continuous curve in a certain point in the cash space of the bank. Morellet includes the whole space in his work by the divided curve.The installation is the product of a competition of the Sparkasse with which François Morellet received the surcharge.

The work No End Neon ( Pier Oceans) is part of the series "endloser Neons". The subtitle is to be understood as an allusion on Piet Mondrians work group of the same name, pier and oceans. In the museum for light art in Unna the installation spreads in an own space. The quiet mood of the sea of Mondrian is avoided with Morellet and is deformed.

This tree had some strange fruits at the Duisburger Kantpark. Arched-shaped neon tubes shines through the branches. The eight individual parts prove together one circle. The work is a tribute to the jazz singer Billie Holiday and carries the name from one of her best known songs to rope Fruit (homage à Billie Holiday).