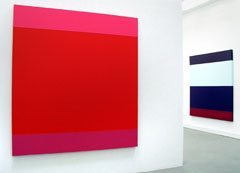 Gallery m 2004
When I showed them the slides from a Berger show my
English friends became engaged in a vigorous debate
over the differences between what they called lilac, old
rose, wine red, faded pink and raspberry fool interspersed
with discourses on English cakes, puddings and jams.
Maroon, they pointed out, was a very popular colour for
school uniforms.

Gallery m 2004
In Germany we don’t have school uni-
forms, so possibly I am unaware of some of the colours
Sybille Berger mixes in her North London studio, while
on the other hand I suspect that her German, or more
precisely, Southern German origins reach into her work
as a thread of memory.

Gallery m 2004
She’s been to India, too, and has
some knowledge of fabrics and patterns. In any case she
works with a set of disturbing colours and with a set of re-
assuring colours, which are not identical with light and dark
however.

Newlyn Art Gallery 2005
After her time as a student at Goldsmiths College this
painter spent several years making what I would call
collages of colours, seeking infallibility. Some time ago,
this mode evolved: a central surface is bordered above
and below by thin bands.

Newlyn Art Gallery 2005
Her paintings have become
more physical. They have body. They speak into the
room; one would like to touch them. Still, I am not sure
if Berger’s paintings are concerned with the colours she
uses or with those she does not. 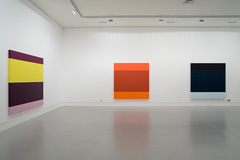