Paintings by Marta Guisande
A culture of extreme reserve in handling the painterly possibilities is expressed in the painting of Marta Guisande. The artist spreads fragile veils of colored emulsions over the minimally primed canvas, leaving behind alternately transparent and more opaque surfaces. Nowhere in this work does the viewer encounter a lacquer-like sealed surface that shuts itself off from and reflects its surroundings. The paint she uses is in its consistency reminiscent instead of the breathable lightness of traditional wall paints – and, in fact, the artist does use acrylic, casein and dispersion paints next to and on top of each another. 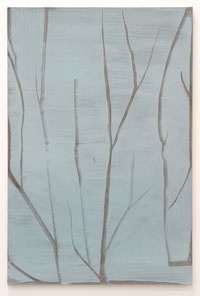 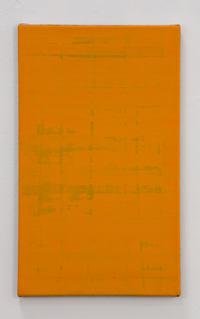 untitled, 2006, 50 x 30 cm
The calm, even painting motion, which betrays the radius of the hand at work, leaves behind traces in the form of a fine relief of brushstrokes in the body of paint even once the work has been completed. In some cases, the veils of color are so thin that the texture of the canvas underneath shows through, lending an additional structural element. Many of the works are built up out of several layers of paint, which however can each be traced back to transparent "next to nothingness," so that even under the last layer all of the previous ones remain discernable.

With Marta Guisande, less is always more. This should be taken literally, because in certain phases of her work the artist begins to scrape off the paint again either in lines or over surfaces. This might be done while the paint is still wet, so that the last layer applied is simply pushed aside with an object. Sometimes, the resulting linear forms seem to have been drawn on first in another color, which now – except for the edges that are already dry – is also wiped off again. In other cases, she scratches and sands down the surface after the paint has dried, so that traces are left behind that resemble the signs of wear that objects display after intensive use. Large patches of paint sometimes become detached as if by accident at the edges of the canvas or on the intersections of the incised lines. These are integrated into the overall effect of the image, just as are the fine fissures that can form when the paint surface dries. Blunt and porous, i.e. "breathing" surfaces, allow the pigments used to unfold their full impact; the pictures seem to glow from within.

This lends the flat picture, the painting surface, a spatial dimension: what is past, what is hidden shines through into the present moment of observation. The artist covers up some of these graphic injuries to the pictorial skin with a semi-transparent layer of paint, as if to heal them, so that the interventions underneath can no longer really be seen, but rather only sensed. The viewer stands before an apparently monochrome plane, the movement lying just below the surface only becoming evident upon intense scrutiny that is sensitized to the smallest contrasts.

One might say that "depth" appears here more on the intellectual than the sensual level. Dr. Kai-Uwe Schierz, Kunsthalle Erfurt