Photographs by Laura Letinsky
Still Lifes
In 1997 I started a series of 4" x 5" photographs that were experimental elaborations of details from my earlier couples series. I began to notice the scenes that were left over after meals I had prepared and consumed – unexpectedly beautiful tableaux of dirty dishes and messy counter-tops. The formal arrangements I saw were almost classical in an art-historical way, and at the same time assemblages of completely banal personal details of appetites, habits and implements. For many years I have been intrigued with Dutch-Flemish and Italian still-life paintings, whose exacting beauty documented shifting social attitudes resulting from exploration, colonization, economics, and ideas about seeing as a kind of truth. I began this work in East Berlin, where the unfamiliar context made me intensely aware of my own cultural and material relationship to food. For the several years I have continued this project at home in New Haven, Rome, Berlin, and Chicago focusing on the details of cooking and eating.

In these still-lifes, I am not interested in the allure of the meal that awaits an unseen viewer's consumption. Rather I am curious about those domestic objects and spaces that are touched, devoured, and discarded. By photographing the remains of a meal, I am exploring the formal relationships between ripeness and decay, delicacy and awkwardness, control and haphazardness, waste and plenitude, pleasure and sustenance. I wish to engage the photograph's transformative qualities, changing what is typically overlooked into something beautiful. I want to look at what is "after the fact," at what (ma)lingers, at what persists, and by inference, at what is gone. This project is part of my ongoing photographic exploration of intimacy as the homely and the beautiful. Laura Letinsky

Watch a video interview with Laura Letinsky as she prepares for the opening of her exhibition Ill Form Void Full at The Photographer’s Gallery, London (till April 7, 2013). 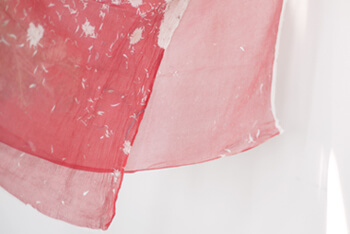 Honeymoon Bombay, 2015, silk chiffon, 104 x 127 cm
The scarfs from the series Ecstatic, Even by Laura Letinsky are printed with photographs taken by the artist at various locations in and around Mumbai, including the flower market in Bangalore and a wedding marquee the day after the festivities.
Rather than conveying the original state of the respective piece of ground photographed, the pictures have been montaged into new compositions by the artist through manipulations in framing and perspective along with image editing. This photographic intervention is however not readily discernible in the works. At first glance, it appears as though the ground is depicted just as the artist found it. Only upon closer examination does the balanced arrangement of objects betray the collage technique. 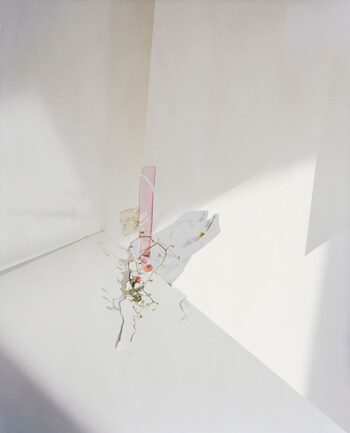 Ill Form and Void Full #25, ca. 114,3 cm x 96,52
In the most recent series Ill Form and Void Full, Letinsky uses photographs to construct her tableaus as well as her previously employed repertoire of objects. Drawing from pictorial sources both high and low, she builds these works with extracted bits reconfigured from Martha Stewart Living, Artforum, Good Housekeeping, Ikea and Roche Bobois catalogues, penny flyers, old work prints and other found images. An amalgam of two and three dimensional objects placed within fields of nuanced tonal shifts, her photographs indicate – and frustrate — our spatial understanding. These photographs further interrogate the genre of still-­?life as relates to need and want as materialized through objects and their image(s). Through Letinsky’s use of space, light, and color, what is familiar is made uncanny in their photographic apprehension.
Untitled # 3, Fall, 2008
"Fall - I was thinking that those photos were made in the fall, literally, but also the subject matter, little remnants of fruit, reminded me of the Fall in the biblical sense with associations about ignorance & bliss, knowledge and unhappiness." 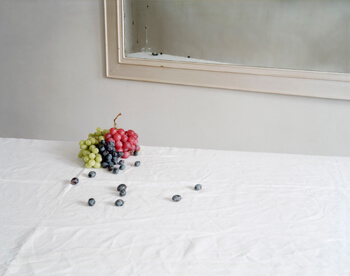 Untitled #117, Hardly More Than Ever, 2007
„The title for the series, Hardly More Than Ever is a play on words, either lifted or inspired by Gertrude Stein's Tender Buttons, and other writing. I love the way she dislodges language from it's expected usage and exploits its sound and association as revelation (revealing and uplifting). It's associated with phrases like, "I love you more than ever" yet the qualifier of "hardly" could go both ways, i.e. a little more than ever or hardly as in barely, or not as much... "

"For To Say It Isn't So, I've similar associations. "To say it, isn't so" with a comma separating the clauses would mean that to say something doesn't make it so (something I tell my 10 year old all the time although if one knows their language theory, particularly the notion of the performative utterance, to say something can make it so e.g. wounding someone with words, expressing devotion, and so on). But by removing the comma suggests that to say "it isn't so" does something opposite, a denial that is unclear in that it kind of undoes itself i.e. to say "it" makes "it" not so."

"A lot of this is suggestive and playing with language in the way that I hope my work "plays" with photography (photography as visual "language")."
Laura Letinsky in autumn 2008

Untitled # 14, The Dog and The Wolf, 2008
"The title of the series The Dog and the Wolfis an association with the hour when the sun is setting but there is still light. Dusk is literally when the photographs were made, and alludes to the French use of that term, which is one of magic, when strange, unexplainable events may seem to occur. Additionally, the parable of the dog and the wolf which is about the allure of domesticity for the well fed dog and the compulsion of the wild wolf who even while starving, refuses the invitation of the dog to join him at his master's home because it would mean to be owned, and thus subdued. I associate this last part with social stereotypes and issues about the public and the private as well as the contrived vs. so-­?called nature."

Untitled, Italy, 2009
Italy is a new project of Laura Letinsky’s work, which has been commissioned on site in Rome, Italy. During one month in spring 2009, the Canadian artist photographed tabletops in historic and elegant Roman palazzi.