Photographs by Simone Nieweg
Simone Nieweg (*1962 Bielefeld, lives and works in Düsseldorf) studied at the Kunstakademie Düsseldorf (Arts Academy of the city of Düsseldorf) as a master student of Bernd Becher. Field, meadow and forest landscapes as well as gardens are her themes, which she has been subjecting to a kind of long-term study since 1986. 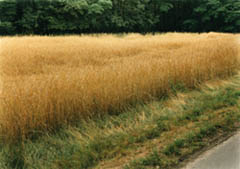 Simone Nieweg is a photographer of gardens and landscapes. Her work, as it has manifested itself over the past thirty years, knows no other interest. At the same time, a certain serenity hovers over her pictures. In them, nature seems entirely focused on itself. One immediately notices that human beings are absent. They are not physically present, and their vehicles, buildings, and the noice of their machines are likewise absent. Trees, plants, and the broader structures of the landscape are conceived as tranquil phenomena sufficient unto themselves. They display a distinctive air bordering on self awareness. The allure of colors and shapes, the shifting complexion of the soil, and the refractions of light at various times of year-these things portray nature as a sensual reservoir that is inexhaustible and unneedful of man and his senses. 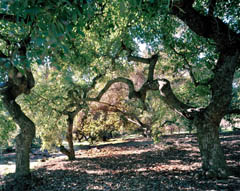 Wattle’s Farm I, West Hollywood, CA, 2012, Archival Pigment Print on Alu-Dibond
When man also appears on this stage, he does so unobtrusively and from the wings. Then nature also appears in relation to him. It is molded by him and adapted to his needs, especially in the area of food production. At times we see a paved road leading to a field of corn or grain and discover tractor tracks along its periphery. But Nieweg's interest is not primarily directed toward industrialized forms of agriculture, its magnitude, or the working of the land by machines. She is particularly drawn to the small-scale cultivation of fruits and vegetables found on the outskirts of cities and at times directly adjacent to the workplaces and living quarters of the owners. In such gardens we witness the direct interaction between amn and nature in a form which has developed over long time periods of time. 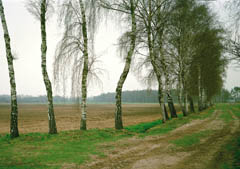 Briken am Feldrand, Gütersloh, 1991, C-Print
Nature, as it appears on the images, still possesses a unique intimacy. When nature is worked with simple, hand-held tools, the traces of man's labor take on a special immediacy. Plants bear witness to their careful cultivation; they are not part of an anonymous agricultural blueprint. Nature bears the marks of man's presence without losing its own identity. In fact, a genuine symbiosis of man and nature takes place. It is for this reason that nature often appears to be a direct extension of man's domestic sphere in these photographs, a shift of living space toward the outdoors, as it were.
[...] 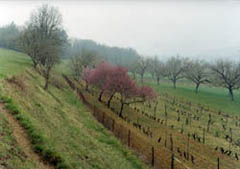 Bei Lascaux (blühende Pfirsichbäume), Montignac, Dordogne, 2009, C-Print on Alu-Dibond
Nieweg need not travel far before setting out on her hikes. The objectives are not far from urban starting points, such as Düsseldorf, Bielefeld or even Paris. She can quickly transport her camera equipment to the starting point by car. On her treks there is no specific objective or time limit. It is not a matter of espying certain phenomena, such as prominent points of interest. The routes are not laid out topographically; her objective lies more in a certain state of mind. The searchfor something in particular must cease; it is also not guided by clearly formulated preferences. The long and montone meandering overland produces a distinct form of concentration that expands one's vision, enabling it to take everything in. Its receptivity for the external becomes more refined the longer one walks; it becomes a neutral channel through which phenomena rush unhindered.
The suddenly, on the basis of this specially attenuated vision which is combined with long artistic experience, the almost dreamlike roving of the eye finds a clear point of focus. The visible yields to the moment, and out of the multifarious and initially contingent impressions emerges the order of an image. Now the camera must be set up quickly, and the practical aspect of photographic work begins, an aspect which is also intuitive to a great degree. A perspective must be selected, the borders of the image defined, and one must wait for the correct light for the aperture opening.
The basic situation of photography ensues in which the conscious mind crosses over into the photographic device, making it an instrument of its will.
[...] 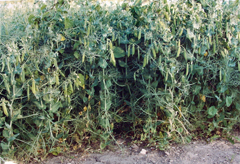 Erbsenfeld, Moussy-le-Vieux, 2006,
C-Print
Nieweg has developed a visual language that invites us to step into this world and take a close look. The photographs are poised between intimacy and attention to detail. The close-ups of vegetable patches, which she initially preferred, she cast aside long ago. Her visions has broadened and grown more generous; it now includes the horizon. An important impulse in this developement was the inquiry into the tradition of landscape painting. It was here that Nieweg found clues for the developement of her own visual concept. She was guided first and foremost by Dutch Golden Age painting and by French Impressionism and its successors. In her ensuing photographs there is a completeness that will tolerate no empty spaces as pertains to form. The entire surface of the image is now artistically formulated. Two important observations can be made in this context. The horizon line is always set in relation to the foreground in order to draw the viewer directly into the image narrative: therefore the horizon is given an animated structure through the inclusion of buildings and trees, and is not just linearly defined. These, on the other hand, find an echo in other areas of the image. The composition of the often broad plant surfaces in the images also takes on a distinctive vitality. In the paintings of artists such as Renoir, Monet and van Gogh, Nieweg discovered how a dynamic brush style - in which each stroke represents an autonomous locus and not merely a subordinate surface element - engenders variation and vivacity.
In Nieweg's case, one can observe how photography reassesses its means of expression by scrutinizing the incipient autonomy of painting. One may also assume that it was the encounter with Impressionist painting which led Nieweg to France, where she has persistently devoted herself to photography for some years now. It was here that she discovered a milder, more strewed light than she knew from Germany, as well as a new complexion of the soil. France was a key element in her development of an expanded visual vocabulary, not least because it was in the landscapes and gardens here that she found a different and perhaps freer concept of order as regards man's shaping of nature.
[...]