Work of art by François Morellet 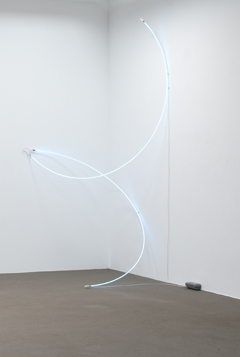 Cercle à demi libéré n°2, 2015
Bearing in mind:
That works of fine art have never succeeded in transmitting to the observer the message, philosophy, peotry or even sensibility which the artits intended.

That the observer are ingenious (see Robert Filliou), but need to unpack their peotical philosphical picnics in empty places specially prepared for this cause.

For 20 years I have produced useless (consequently artistic) objects characterized by the total absence of interest in composition and execution and by the presence of simple and obwious systems, frequently concerned with pure chance or the participation of the observer.

I have reduced my intervention, my creativity and my sensibility (I hope) to a minimum and I can consequently announce that everything yhat you find, apart from ma small sastems (and if this were nothing) belongs to you as observer. 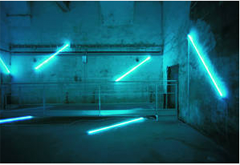 NO END NEON (Pier and Ocean), 2001/02
Zentrum für Internationale Lichtkunst Unna
Coming from the classical panel, Morellet increasingly focusses on three-dimensional works. The question of space not only dominates the installations, but is most of all presented in the so called
Désintegrations Architecturales - architectural disintegrations. 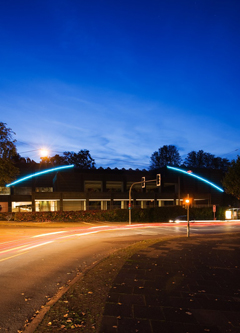