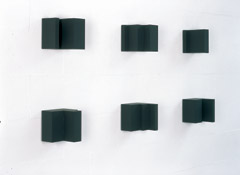 Already in his early work groups, Perrodin explored proportional relationships, serial and variable aspects, geometry and asymmetry. At the same time, the formal multiplicity of his objects and object groups can be traced to a systematic basic concept stemming from clear-cut, mathematical rules. His works all revolve around the same conceptual core, spiraling in ever closer, series by series, work by work, each defining it more precisely in its own way and using its own method.
His over thirty-year career has thus produced a number of serially arranged, framed glass surfaces, back-painted in a monochrome black, emerging from the artist’s structural analysis of how frame and picture plane relate. In Perrodin’s works, the frame is an integral part of the picture/object, while the picture surfaces themselves do not show any painted representation, but rather become mirrors reflecting the surrounding space, the viewer, and also the light. They manifest not only the basic structures of what our culture defines as a picture in the traditional sense (a framed picture plane), but also hold up a mirror to the viewer and his perception. 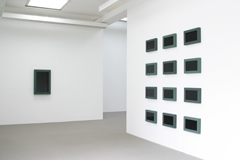