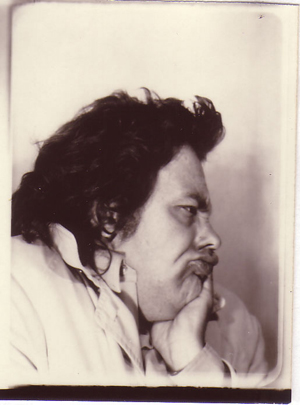 o.T. (Automatenportrait), ca. 1968-70
bromine silver print, vintage, unicum, ca. 5,7 x 4,4 cm
Automaten-Portraits. 1968 - 1970
Between 1968 and 1970 Arnulf Rainer made selfportraits by the passport photomachine at the train station West in Vienna. He did not focus on the most sympathic looking appearance, but on the psycho-physical state which he wanted to make visible. These photographs which have been made in series always during the nights when the train station hall was empty, he used as basic material which he overpainted. By this he created his overpainted selfportraits . In order to create these, he made reproductions and big copies of those small, intimate and fragile appearing pass photographs with which he seemed to questioning and divesting himself. The authentic and unaffected smallpass photographs which show grimases, emotions and expressions are produced in repeated series