Sculptures by Guiseppe Spagnulo
Sculptures in the park
Spagnulo is working since 1972 on the work group called "Broken Iron". Similar to Rückriem, Spagnulo also considers sculptural work as breaking the material. He considers the form as a consequence of an external, plastic intervention into the unity of the material.
The work group "Broken Iron" represents in a symbolic way the destruction of geometric and from the beginning on destined balances (circles) or the penetration of the cut which can be understood as a seperation of surfaces and its transformation (diagonal/ Grande Curva). The idea of these works is based in the bold certainty of the break of symbols of perfection in society. 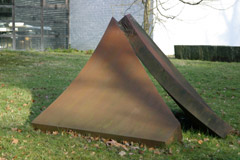 Each of the 4 scultprues Ferro Spezzato (Diagonal) created 1974 has been cut through welding in a different place: as consequence of this cut and of the weight of the iron block (which is held only at one side) the sculpture gets its form as a result of a self formed material. The penetration of the cut seems to seperate the surface and documents its transformation (rectangel into diagonal).