Photographs by Boris Savelev
Visual Novelty can be found in objects which are constantly before our eyes. Everything depends on light, that great magician which in a second can transform the trivial into the extraordinary."
Boris Savelev 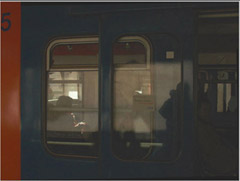 Self-portrait, 2003
Born in 1948 in Chernowitz/Ukraine, Boris Savelev has been working as a freelance photographer for various Russian and Ukrainian publishers since 1982. After starting out working as an engineer, Savelev taught himself photography and turned it into a new career.
With his color snapshots of his immediate urban environment, Savelev has developed an almost constructivist, at times seemingly non-representational pictorial language. He has the ability to capture his unique take on things in direct and precise images, framed and composed by his discerning eye. Shadow is one of his primary tools here, while accents are set using light and color. Banal, everyday motifs are transformed into mysterious, tantalizing imagined worlds.
Savelev's compositions place him squarely in the tradition of Russian Constructivism, harking back, for example, to Alexander Rodchenko's famous photographs from the 1920s. 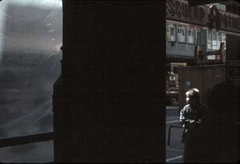 Boris Savelev has been passionately interested in photography since childhood. In 1966 he moved from the Ukraine to Moscow, where at 20 he became a member of the "Novator" group of photographers. Savelev has always taken pictures of his immediate surroundings: life stations in Chernowitz, St. Petersburg, Moscow and New York are all reflected in his photography. The pictures consist almost exclusively of outdoor scenes, and very rarely portraits or interiors. Savelev likes to make his photographic forays through the city in the early morning or evening, when the light is especially intense. A keen observer, he is always on the lookout for what might be unusual about ordinary, everyday scenes. But his artistic world has nothing of the accidental about it. Although his point of departure, strictly speaking, is reality as he finds it, what he chooses to photograph is of course subject to his own unique eye. His work can thus be regarded as a special form of documentary. He doesn't stage anything or try to rearrange the reality he comes upon before capturing it for posterity. Instead, using the simplest of technical tools, he draws the viewer's attention to stimuli that have until then eluded his perception. The fascination of these images lies precisely in the simplicity of the photographed object, which, once deemed worthy of being recorded on film, unfolds an enigmatic power.

Shadowy, cryptic and multilayered-these are the qualities that describe the photographed world of Boris Savelev. The artist's images bear witness both to his own subjective encounters with the world and to the mood of his country or the places he is visiting.

For his exhibition at gallery m Bochum in 1995, in which 55 works demonstrated his development as a photographer since 1987, Savelev experimented in London with a new production technique, the UltraStable Carbon printing process, which as yet has only be tried out in a few of the world's photo labs. The first portfolio of Savalev's work was prepared for the exhibition using this process, containing a selection of 12 photographs.