In her video work, the Swiss artist makes working hands the centre of attention. Whether kneading bread, rolling wool into balls or folding tea towels, the focal point is always on the work women have performed for centuries. In her new installation the artist continues to address this theme.

The synchronised HD videos are projected onto light-coloured panels of fabric. The use of objects as a projection surface is characteristic of Evelina Cajacob's video work. They always relate closely to the content of the footage. The installation begins with the immediately recognisable sound of unbleached cotton fabric being ripped apart. While the hands appearing on screen tear apart the seemingly endless lengths of cloth, the rest of the body and the background merge into a uniform black surface that contrasts with the white surface of the foreground. At times the protagonist rips the fabric apart at a fast and furious pace; at other times she pulls it apart slowly. Her hands keep disappearing from view so that only two abstract surfaces can be seen. An irregular rhythm ensues, with the relationship between light and dark constantly changing.
The only indication that the second film has begun is the soft hum of a female voice. The scene, once defined by the noise of fabric being destroyed, begins on a quieter note. This impression is intensified when it becomes clear that the woman is patiently sewing the cloth back together again, with slow, skilful movements. As the first film fades out and comes to an end, a peaceful mood of reconciliation takes hold.

The precise timing of the two back-to-back videos leads to a composition of visual and acoustic elements. Image and sound in both videos complement each other to form a unified whole. The disturbing sound of cloth ripping is underlined by the clear contrast of black and white, while the calming effect of a woman humming is reflected in the image of the sewing hands on white cloth. The two videos simultaneously have a contrasting yet interwoven effect on each other.

This installation addresses the theme of destruction and restoration. What motivates the two actions is something Cajacob leaves open. The ripping apart of the fabric seems absurd and futile in the immediate context of it being sewn back together again. Yet the act is not performed impulsively, but in a conscious and concentrated manner. It ultimately remains unclear whether the act is based on a rebellious mood or an intention to use the cloth in a different context. Possible interpretations of the cloth being sewn together thus range from an act of reconciliation to the creation of something new. 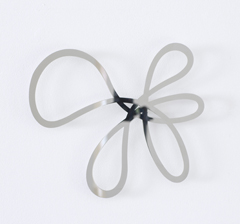