From 18 January to 4 May 2013, Galerie m Bochum will show its first solo exhibition of the works of Antje Dorn (b. 1964 in Aachen). The Berlin-based artist’s recently completed Milkyway series, encompassing 45 abstract landscape paintings, will be on view in its entirety.

In this new series, Dorn focuses on “gazing at the sky,” as she herself puts it, and which the title also hints at. And in fact, the area above the horizon is where the action takes place in the majority of the pictures. Multiple shapes in vibrant colors sprawl across each canvas. Geometric or amorphous forms stand out in a kind of close-up against a monochrome ground – sometimes piling up to form structures. In most cases they are arranged on surfaces that recall landscape silhouettes, while at other times they seem to float in the pictorial space or firmament. Some of these forms summon immediate associations with trees, clouds or the sun, but others remain ambiguous and enigmatic. They are reduced to essentials, partaking in the same symbolic quality found throughout the artist’s work. Antje Dorn does not set out to execute a naturalistic representation of an object, but rather creates a simplified depiction using icons to symbolize certain phenomena in our world of things. As a result, we see the vertical brown stripes topped by a rounded green blob as a tree. It is not only color and shape, however, but also context that helps us to interpret what we see in figurative and narrative terms.

Dorn is inspired here by an aesthetic we are familiar with from comics and similar pictorial genres. The individual components of a picture are set side by side, isolated from one another, through which they convey their autonomy. Their surfaces are made up of bold monochromatic colors. The artist makes little use of painterly perspective and renounces atmospheric lighting effects entirely. The pictures are hence self-referential; they do not show a space defined by clues to depth, but instead develop their message on the flat painted plane. This flatness is reinforced by the marked traces left behind of the application of paint, which lends a tactile quality to the works. They derive their physical presence from the impression of simultaneous lightness and heaviness, intensified further by a feeling of equilibrium.

Dorn’s paintings exude a light-hearted, humorous aura through apparent interactions and mutual influence between the individual elements, which hence become protagonists in their own unique world. In their respective constellations, they convey occurrences that seem quite matter-of-fact and inevitable. And seen together as a group, they present an animated, surrealistic panorama. 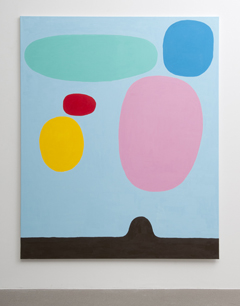 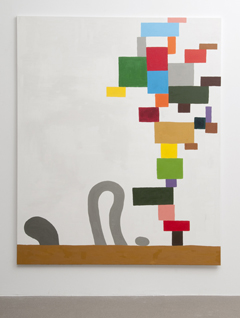