Elementary conditions of life, nature, time, gravity and lightness, delimitation and openness – these are the parameters around which the featured works revolve.
While Evelina Cajacob tracks in her drawings and video works timeless, recurring phenomena, Carla Guagliardi explores the irrevocable changes that are inscribed in materials. The two artists share an immediacy in presentation and the use of materials that also finds expression in a clear aesthetic language of form.

The video projection shown in the entrance area, Cajacob’s LangeZeit, begins with the end of a long, thick wool thread that seems to come out of nowhere. A human figure, of whom only the upper body is dimly discernible, winds the rough wool patiently and evenly into an ever-fatter ball. With time, the ball grows so large and heavy that the act obviously takes some effort. After 80 minutes, the loop starts up again from the beginning.
The time it takes to practice a craft is also a theme in drawings by the Swiss artist: sheets of paper and walls are covered in strokes that are often only a few millimeters long. Delicate shadings outline the contours of plant structures or meander in node-like, forever transforming loops across the paper. A large-scale wall drawing developed specially for the show at Galerie m responds to the vegetation surrounding the gallery. The exterior is brought inside – but not as an image copied 1:1 onto the wall. Instead, the drawing evokes the ideas of outdoor light and shadow, nature and space.

The lightness of Evelina Cajacob’s works is juxtaposed with the more weighty installations created by Carla Guagliardi. In Guagliardi’s pieces, contrasting materials face off as equal players. A preoccupation with the interaction between carrying and being carried, with how objects mutually shape and hold each other, distinguishes the work of the artist born in Rio de Janeiro. The expansive floor installation Verso consists of several wooden planks over four meters in length that are in part stacked up atop large white balloons filled with air. The balloons are deformed by the weight of the boards. But at the same time, the load is a guarantee that the air inside the balloons cannot escape through the unknotted openings.
The other installations by Carla Guagliardi, the two versions of Partitura / Score, Big White and O Lugar do Ar, play as well with the formative concept of inertia and change. Guagliardi’s works set into motion physical processes in which the materials highlight the dynamic relationships between gravity, pressure and expansion.

The works of both artists are unpretentious and yet complex. They raise questions about the concepts of duration, repetition and development, heaviness and patience, existence and experience. Each drawing, video work and installation is bound up in its own timeframe, a time that also has a human dimension. 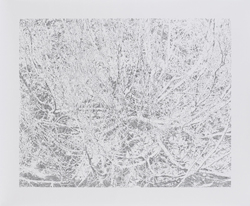 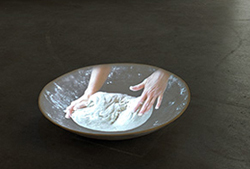