The Madrid-based artist Alfredo Álvarez Plágaro (b. 1960 in Vitoria-Gasteiz, Spain) is now showing a new group of Identical Paintings, as he calls this work series. They consist of groups of up to one hundred identically sized paintings made with mixed media on canvas and wood, each group executed in a simultaneous artistic process. Instead of finishing one picture and then copying it, Plágaro works in parallel on the entire series. Installed together, the pictures create an overall dense and shimmering pattern or in some cases allow for remote associations with certain motifs.
On closer scrutiny, the paintings betray not only small differences but also finely painted details. Plágaro draws on various substances for his mixed media technique, resulting in fascinating phenomena playing across the surfaces of the pictures. The paint looks porous in some places and elsewhere oscillates between transparent or opaque. This in turns lead to variations in how the paint layers absorb the light, which is at times reflected back and in other passages penetrates the surface to make the colors glow from within.
The possibilities for the installation of the individual modules are exceptionally flexible and diverse: they can all be rotated in a different direction – but always all in the same one – or arranged in different configurations, so that they strike up exciting dialogues with the exhibition space. When viewing the pictures, the knowledge of their open-ended arrangement inspires playful contemplation: What images would arise if the paintings were arranged in a row, in a long frieze or in a block?
Alfredo Álvarez Plágaro executed his first Identical Paintings in the late 1980s. Since then, he has continued to develop this body of work while remaining true to his basic principle. New trends are thus evident in the current exhibition, which the artist himself describes as follows:

The colors have exploded! They are now much stronger, livelier, almost flashy, and there are numerous compositions with complementary colors.
On a technical level, the following has changed:
In the new works, I have applied the paint directly onto the unprimed canvas, using many different techniques, with layers of acrylic, oil and latex paint as well as polyester resin. The new works therefore have varying textures and surfaces. It is also important that accident plays a bigger role in the more recent works. This makes repetition that much harder. 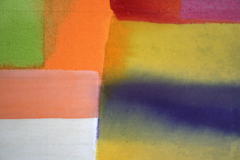