Summertime – this is the unusual title of the new exhibition at Galerie m Bochum, fitting for the season and promising a voyage of discovery beyond the horizons of the quotidian.
A wide array of artistic approaches breaks the bounds of all-too-categorical concepts, offering the visitor observations and experiences on diverse levels. The central themes are reflection and self-reflection – of the artist, of his or her art, and of the viewer. Taking multimedia works as its springboard, the exhibition evolves into an art space in which sensual perception dominates and each medium is by turns spotlighted and surmounted. At the same time, a complex dialogue emerges between the various genres and between artworks and viewer.


For the first time, Galerie m Bochum is featuring a video room by Berlin artist Melanie Manchot, who confronts passersby in New York City with her question “I wonder whether you would give me a kiss,” provoking astonishing reactions. In the video installation by Thomas Florschuetz, the eye of the artist becomes the motif. Eyes look out at us from three screens, seemingly independent of one another, taking on a strange life of their own. An interplay between seeing and being seen emerges, the same theme that is at the heart of the photograph by Lucinda Devlin being shown at the gallery, in which the camera is startlingly turned on the viewer.
In Six-pack I (Diptych), Mischa Kuball combines photographs and light boxes into a fascinating unity that turns the ordinary media viewpoint on its head by making the tool for projecting pictures the subject of the picture. Yannick Koller, on the other hand, goes against the “classic” production process of photography by taking 8 mm films as the point of departure for her works. The wall installation Holbein – Adieu by Ger van Elk likewise shakes up art history’s static genre definitions. In his “moving pictures” the artist merges photography, film and paintings to create a poetic mix. By integrating art historical quotes, he simultaneously addresses his own transience – a theme that is also expressed in the wall installation by Carla Guagliardi. Finally, Nam June Paik, considered the founder of video art, forms a transition to the paintings on exhibit with his monitor perched on a paint-splashed easel, from 1984.


Time and immateriality, integral components of pure multimedia works, reveal themselves as a new dimension taken on by the otherwise two-dimensional works of Sybille Berger and François Perrodin. Contemplating the innumerable layers of red paint Sybille Berger has applied, the impression of materiality is gradually replaced by a more subjective experience of space. The reverse glass painting 63.5. by François Perrodin oscillates between the impression of cool, elegant perfection and the fact that the smooth black surface also reflects the room in which it is placed and the viewer looking at it. Similar to these two works, Lee Ufan’s wall painting Resonance also poses the question of where the action in the painting is actually happening. The lack of a traditional delimiting canvas or frame opens up completely new levels of perception outside the purely visual experience.


The photographs of Aino Kannisto and Boris Savelev by contrast reflect back on the artist’s own identity – in the form of shadow and mirror image – alluding to psychological and philosophical aspects of existence. The powerful paintings of Jens Stittgen as well go far beyond the representational function of his medium. Out of an apparently chaotic surface of wildly arranged colors a human form gradually crystallizes, which however never quite becomes graspable.


A reflection in the double sense of the word takes place in Richard Serra’s drawings series, "Rounds". The indirect application of color by means of frottage creates a reversed mirror image, while the artist at the same time reflects on the technical possibilities of his medium, the drawing. Author Barbara Köhler also develops a playfully reflective attitude to her own special medium – language and typography – by exploring the possible ways in which words can be formed using a letter square.


The sensual and reflective quality of the exhibited works conveys complex viewpoints and messages, which the viewer experiences with striking immediacy. This kind of “concretization” of experience, complex communication and interaction, not as a “ready-made,” predefined perceptual event, but instead as an individual process, is the challenge taken up by Summertime. 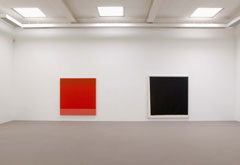 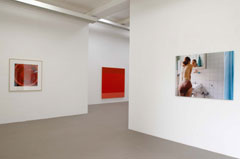 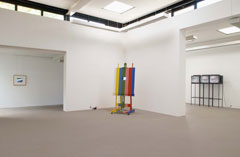 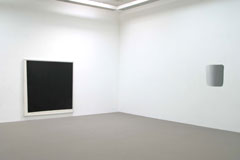 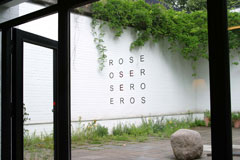 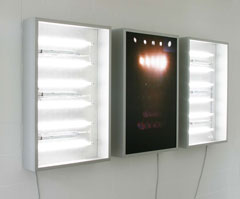 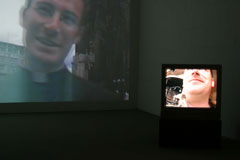 Melanie Manchot, For a Moment Between Strangers, 2001