On the occasion of Evelyn Hofer’s 85th birthday, Galerie m Bochum is mounting a solo exhibition of works by the photographer that have never before been displayed.

When Galerie m Bochum 2001 presented its first exhibition of works by Evelyn Hofer, her photographs were still virtually unknown in Europe. In the meantime, the gallery’s engagement has led to a “rediscovery” of the work of this extraordinary photographer. Playing an important role here was the monograph published by Steidl Verlag in 2004 (edited by Susanne Breidenbach), which provided an impressive overview of her career. The photo museum in The Hague was the most recent venue to honor Hofer’s work, with a retrospective of over 100 photographs.
The re-examination of the photographer’s career is however far from being complete: Evelyn Hofer’s extensive oeuvre is still waiting to be explored in its entire breadth. The current exhibition at Galerie m represents the next important step in this endeavor.

The complicated and expensive production process involved in creating her dye transfers (a color printing process used by fine-art photographers) means that Hofer has as a rule been able to produce her photographs only for exhibitions. Now, the artist has taken advantage of increasing international exhibition activity and the enormous interest in her work to select some previously hidden treasures from her archive, photographs that hold deep meaning for her, and to show them for the first time, at Galerie m. The viewer is thus given the opportunity to rediscover whole groups of works and to gain new insights into various aspects of her approach and technique.

In this selection of black-and-white and color photographs, the diversity of her work once again becomes apparent, encompassing as it does landscapes, still lifes and also portraits. The pieces can be ordered both geographically, with pictures of Washington, New York, London, Dublin, Paris and other cities, as well as by a diverse set of themes. Evelyn Hofer has achieved fame principally for her sensitive portraiture. A series of portraits of children at once differentiates and deepens our understanding of the significance of this genre within the context of her work. A group of six early portraits of Andy Warhol documents in addition Hofer’s contact with the New York art scene of the early 1960s.
Alongside the portraits, black-and-white natural landscapes are displayed here for the first time as an independent group of works. In these expressive, picturesque panoramas, the beauty of nature’s elemental forces and individual nuances comes to the fore. Dramatic cloud constellations are juxtaposed with rugged or gently rolling mountainscapes, each of which owes its special magic to the specific lighting situation.

Special attractions at the exhibition are the new dye transfers, which captivate the viewer with their fascinating and intense coloration. Again and again we witness a compelling interplay between colors and subjects: for example in the picture showing a proud motorcycle policeman posing in front of tree whose overhanging branches are laden with lush white blossoms, or the US Armed Forces General Staff standing at attention before the polished surface of a conference table in Washington; the three Afro-American women in their Sunday best standing before the Harlem Church, or the young New Yorker on his bicycle, behind whom the Queensboro Bridge can be seen and whose red shirt forms a stark contrast with the green of the lawn. What is always remarkable about Evelyn Hofer’s photographs is the keenly felt balance of her compositions and the empathy she demonstrates with her subjects. 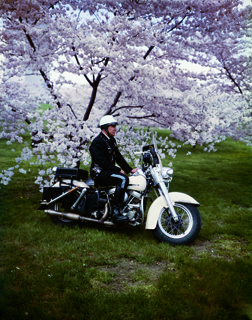 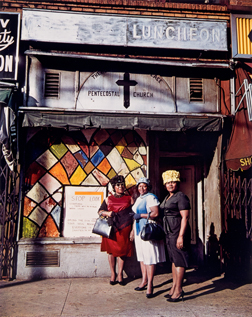 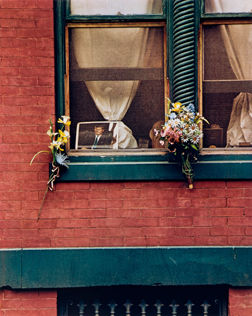