The cross-genre group exhibition TIME IS ALWAYS NOW!, on view at Galerie m Bochum in Schlosspark Haus Weitmar from 30 June to 8 September, is a compilation of images expressing many different ways of coming to terms with the theme of time.
Time cannot be perceived by the human senses; it is abstract, and some philosophers even doubt its reality. Time is a construct of our cognitive processes and yet, despite everything, it is still a real property of our environment. Created by humans as an orientation aid that we can no longer imagine living without, time has found many different expressions in art.

The artworks by both established and younger artists brought together here at Galerie m occupy themselves with the uniqueness of the moment, with transitoriness, while at the same time endeavoring to visualize time. Ryszard Wasko, for example, uses still photographs in his Four dimensional photography to illustrate time - an ability that is otherwise the province of video. In Lucinda Devlin´s Lethal Injection Chamber in Mississippi from the series The Omega Suites, we peer into an empty execution chamber from the perspective of an eyewitness. The finite nature of (life) time and of death by outside force is displayed with an objective coolness that is nonetheless gripping.
Melanie Manchot’s photographs from the series Looking at you loving me explore the natural process of aging. She portrays her naked mother in an empathetic way that preserves the older woman’s dignity, touching on the themes of time, aging and beauty as both process and moment. This process is visualized by Ger van Elk using a mixture of photography, painting and video. In Holbein Adieu the artist reflects on his own transience by quoting a bygone epoch. The presentness of transitoriness, or of yesterday, is reflected quite literally in Barbara Köhler´s text "Ici c´est hier ist gestern." For this exhibition, the writer has once again created a multilingual play on words, one in which time is both a reflection of place and of the viewer, in which past and present interpenetrate.
In François Morellet´s object Interférences de barres paralléles as well, the viewer´s interaction with the work is key to seemingly setting the static object in motion. Time and place no longer correspond here, but presuppose one another.
The large-format photograph from Thomas Florschuetz´s /i>Palast series captures the demolition of Berlin´s Palace of the Republic. The work becomes a time capsule that freezes a historic landmark for posterity while at the same time documenting the end of an era.
The existence of time in the universe is emphasized in the painting titled Correspondance by philosopher and artist Lee Ufan. Richard Serra also makes reference to time and space in his oilstick drawing Garden Arc. Standing before the oversize black surface, the viewer is irresistibly drawn into it, changing his perception of time and space.
In addition to works by Arnulf Rainer, including the six-part Automatenportrait, as well as a two-part work by Frank Höhle showing people in photographs evidently taken in sequence, Cork Marcheschi brings light and sound into play as a further compound of time in his Infernal Machine. When the infernal machine is switched on, electricity becomes visible and its destructive power perceptible.
The exhibition closes with works by Evelyn Hofer and Boris Savelev, which in their juxtaposition point up the divergent approaches these two photographers take to their work. While Hofer uses her large-format camera to make time seem to stand still for eternity in her landscape and city views, Savelev wanders the streets of the world capturing brief moments in time. He combines unusual camera angles with special lighting conditions in his pictures to underline the uniqueness of the moment. 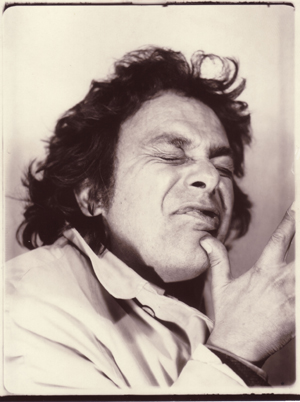 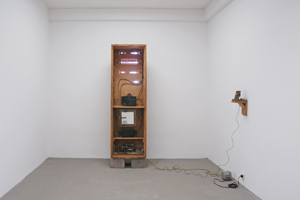 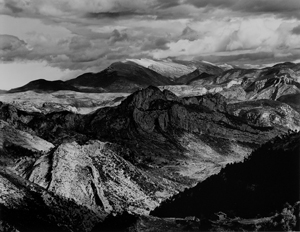