P,E,T,E,R,W,E,G,N,E,R,
exhibition gallery
Press Release
From 13 February to 9 May 2009 Galerie m Bochum will for the first time present a selection of works by American artist Peter Wegner (*1963, South Dakota). Wegner lives and works in Berkeley, California and is already well-known in the United States thanks to several large-scale exhibitions.

The following quote reveals Peter Wegner's extraordinary powers of observation and the openness with which he encounters the world. His thoughts on the photographic series Buildings Made Of Sky (2008/09), which presents the theme of urban space in a totally new way, provide insights into his overall artistic oeuvre.

“Walking down the street one day in New York, I glanced up and saw an invisible building suspended between the others. It was upside down, the color of air. A few steps later it disappeared. Then, around the next corner, I saw another building like the first. I felt that I had stumbled upon something extraordinary, a secret city, luminous and strange. [...] Soon after, I began the photographs that would become “BUILDINGS MADE OF SKY.” [...] The important thing I’ve learned, is to focus on nothing. Believe in it, prefer it, and the buildings reveal themselves: BUILDINGS MADE OF SKY.”

These comments illustrate Wegner’s special perspective on the world around him, his talent for focusing in on structure. He often ventures into borderline areas of perception, seeing what most of us miss and then translating his ideas into art with a great deal of sensitivity. Out of color values, shapes, patterns and signs emerge exceptionally clear-cut and arresting abstract works that exude a strong sensual presence. Wegner is a master at employing reduced means to combine complex structures or widely varying tones in such a way that the individual elements come together to form a singularly harmonious whole. Sometimes he concentrates on details, and at other times he is more interested in the overall effect of colors, forms and structures.
The works selected for the present show at Galerie m trace the wide trajectory Wegner spans from finely honed formulations that take the shape of book objects and works on paper all the way to large-scale room installations. Paintings, photographs, installations and objects from the series WHAT, REVERSE ATLAS, BUILDINGS MADE OF SKY, Remarks On Color and New York Mappings, among others, give viewers an overview of Wegner’s multifaceted creations.

The imposing 40-part work SPACE, TIME & THE WEATHER, 2003 (Remarks on Color) looks like a gigantic geometric spectrum of different shades of blue. Its rhythm comes from a serial arrangement of blue bars crossed regularly by white stripes. Only when approaching the installation from the side does one notice the labels for the various blues, taken from the color charts commonly available in stores. These signifiers attest to the limits of language, which is simply unable to do justice to the infinite abundance of color tones.

The multi-part images from the series WHAT constitute a special kind of “library,” one made up not of books, but merely of titles: GENERAL PRINCIPLES, CROWDS, MEN AND WOMEN.... This series expresses the attempt to systematically categorize a constantly growing number of titles, and thus in the figurative sense a world that is becoming increasingly complex. When words are no longer sufficient, they have to be supplemented with longer and longer numbers: The continual invention of new systems is “[...] a hopeless task, absurd, hilarious. But then again, what else is there?”

The collages REVERSE ATLAS XI and XII are composed of maps that were cut into pieces and rearranged. Wegner is thus, in his own words, reversing the “act of violence” we perpetrate on the real world by dividing it up into sections and forcing it onto a sheet of paper. What’s special about the collages is that their complex patterns of lines, letters and expanses of color come together to form a completely new kind of “map” – one in which pictorial values clearly take precedence.

This glimpse at just a few highlights demonstrates the incredible variety and complexity of Peter Wegner’s work. His pieces oscillate between genres, between heavily intellectual Concept Art and sensory experience, between reduction and opulence: “I want to make work that’s both fast and slow, monumental and ephemeral, simple and complex. I want it lush and austere! I want it to be painting and sculpture and architecture! I want it to be tactile [...].” 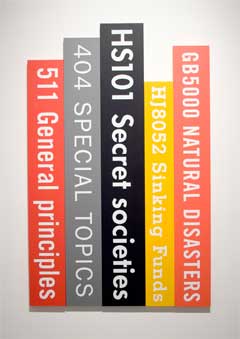