From February 19th to May 8th 2010 Galerie m Bochum will present the latest works by Jan Wawrzyniak. Born in 1971 in Leipzig, Wawrzyniak has received several grants and most recently exhibited his series “Gezeichnete Bilder” (“Drawn Pictures”) from 2007 to 2009 in cities including Erfurt, Kaiserslautern and Cottbus. Today Wawrzyniak lives and works in Berlin.

His pieces demonstrate an intensive exploration of the effects of elementary artistic media. With coal on canvas he composes images that are reduced in several senses: to line and form, to black, gray and white surfaces. His pictures are not tied to a specific motif, but instead generate a sense of perspective solely through the interplay of the various elements – but one that constantly oscillates between the perception of spatial depth and that of a flat picture plane. The exhibition at Galerie m introduces a completely new aspect in Wawrzyniak’s pictorial vocabulary: in his recent works, the artist replaces the traditional rectangle with canvases in asymmetrical shapes. This generates new tensions and spatial effects both within the composition itself and by way of interactions between the canvases that first become apparent in the exhibition context. 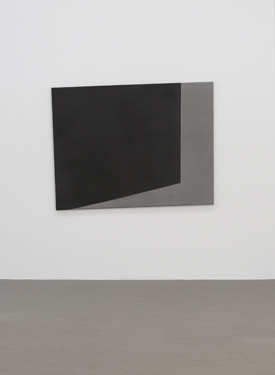 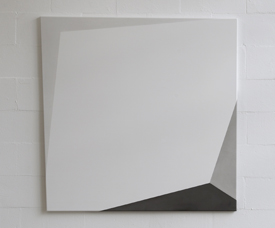