Do you see me?
exhibition gallery

Do you see me?

“Do you see me?” refers to the relationship between artists, those portrayed by them and the viewer. The works by painter Caroline von Grone, photographers Frank Höhle and Oliver Godow and artist Melanie Manchot, who works with film, draw the viewer into a dynamic web of glances and observations. The exhibition reflects upon aspects of how the different media influence our perception and how we ourselves become involved in the constellations of extraneous staging, self- presentation, deliberation and observation. In the process, not just the “image” of the person depicted becomes the focal point. The surrounding area, be it staged, imaginary or real, also plays a role as a constitutive element of the picture, setting or central motif. The exhibition is part of next 1 – discussing photography, a program of RUHR.2010 European Capital of Culture. From 17 to 22 May, six institutions in the Ruhr Valley will play host to encounters between artists, critics, curators, educators and the public.

Do you see me?
Lisa Le Feuvre
In his short story The Adventures of a Photographer Italo Calvino recounts the plight of Antonino Paraggi, a young man who stridently disbelieves photography’s ability to capture an accurate sense of a person. He is obsessed by the impossibility of reducing an individual to a single image, convinced the relationship between photography and memory is rooted in failure. All attempts to make an image reflect a person he knows seems to Paraggi to bear no correspondence to his own recollections. Calvino’s subject watches his friends become determined to possess the present through the camera. Correspondingly, Paraggi becomes progressively more agitated by the activity of making portraits. He worries that photography implies that events not imprisoned by the camera will become lost, with these uncharted moments forgotten as if they had never existed, to become wiped from memory. A portrait represents forgetting as much as it does remembering.

On being asked to photograph two friends Paraggi retorts, camera in hand, ‘what drives you two girls to cut from the mobile continuum of your day these temporal slices, the thickness of a second’. For him, the desire to represent is a momentary lapse of engagement with the world. Eventually, in spite of himself, Paraggi tries photography for himself, but in seeking to create the ideal portrait he found himself yearning for a remembered past, posing his subject to fulfil his own ideals as if ‘trying to photograph memories, or a rather vague recollection surfacing in the memory’. He finally believes he has succeeded in capturing an accurate portrait when he turns to re-photograph the very images he had rejected for their inability to communicate. Our subjectivities cloud what we see and what we understand. Looking is both personal and political.

Every portrait is subjective and fails in its representation. The formal properties chosen to construct an image, be it colour, composition or reference to typologies within the history of art, are indicative of ways of perceiving. Every image reveals a very particular kind of looking, concurrently pointing to what already exists and to potential imagined and projected stories. The portrait is a complicated affair relating to the subject, its means of capture and the subsequent release into the unpredictable public realm. This exhibition with Caroline von Grone, Frank Höhle, Oliver Godow and Melanie Manchot asks the question ‘do you see me?’ to interrogate the operations of the portrait across painting, photography and film. Looking involves taking, giving and refusing permissions – a process predicated on control and inscribed within tangible and intangible structures.

In addressing the question ‘do you see me?’ these four artists point to the portrait as an exchange of ideas constructed through unreliable acts and encounters of communication and memory. Gertrude Stein spoke of the continuous present: a notion concerned with experience and knowledge, as well as knowledge of experience and experience of knowledge. Rather than creating constancy, these repetitions make every experience unique and extended into space and time in a process that sharpens attention. Von Grone’s works are as much a portrait of their maker as they are of their sitter; as much about distraction as attention. By painting portraits in the exact place where the results are displayed she collapses process into presentation, drawing time and space into the portrait, just as Paraggi desired. Manchot’s films return to chance encounters of passionate exchanges in public places drawn from fragments of the artist’s memory. She rearticulates the past into the present by interrogating the space between memory and its representation, like von Grone, through the double. In Höhle’s repeated actions, that replicate the most ordinary poses using a changing arrangement of sitters, differences speak the loudest. These are studies of looking and being looked at. Godow’s photographs also are ruminations on the ways in which the world around us is, and can be, perceived. He narrates a fragmented story through the details that have caught his own processes of looking, embracing subjectivities to propose a reformulation and re-evaluation of the assumptions of seeing. 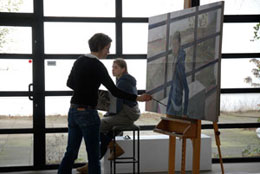 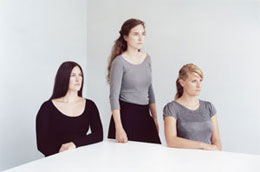 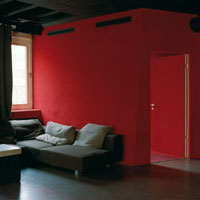