Thozama and Rose | The Audience
The ink drawings and video installation of Tanya Poole Thozama and Rose series depict two karate exponents and friends competing with each other in one of the many South African karate clubs. 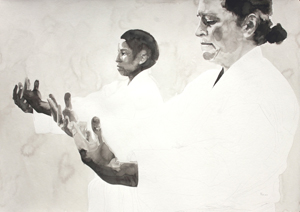 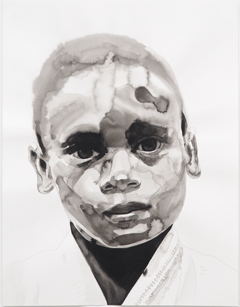 In the video footage, Thozama and Rose appear front-on to the viewer. Clothed in their karate gi, their breathing comes across as loud and fast and their clenched fists are raised in front of their bodies. They are still quite “fired up” and their eyes dart around the room. As if ready to ward off another attack at any time, the combatants appear inwardly centred and intensely focused. The more this stance dissolves, the more outwardly focused the gaze of the women becomes – until they are able to look right at the camera and breathe calmly again.

The second series, Audience features portraits of karate club members. Their faces, like the images of the two combatants, exude intensity and the images stand out for the radical way ink is used in them. The contrast between fine pencil lines and flowing, glazed ink surfaces, the dense black and changing shades of grey lend huge vitality to the faces. At times the vibrant strokes take on a non-representational quality to reveal some of the external characteristics of the individuals being portrayed, like Peter’s deep eye sockets or Mairi’s curly hair.

Poole frequently combines different media in her series, as she does here by including a video with ink portrait. Irrespective of the chosen medium, however, she always succeeds in creating an overall link between the individual works. For instance, the pieces of the Thozama and Rose series all raise questions about the interplay between body language, gesture and facial expressions in a state of concentration, focus or relaxation, and the unpretentious directness of the images leaves a lasting impression of authenticity and intensity on the beholder.