Radar
As one of the first remote sensing techniques of mankind, the radar method as a satellite-based georadar has a special significance in the exploration, measurement and documentation of the earth's surface and crust. In contrast to other techniques, the radar is able to scan the earth's surface even on cloudy days or at night, and has an advantage over purely optical methods such as triangulation or even the human gaze. 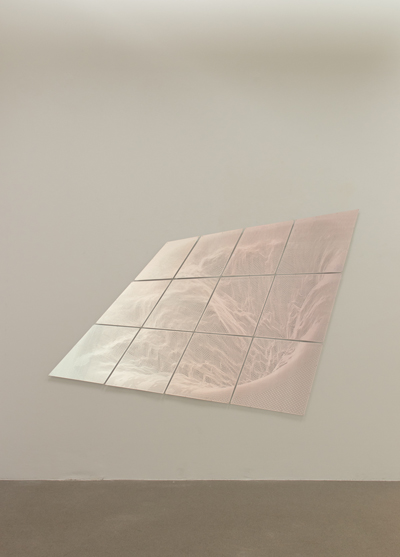 Radar II, 2019
installation view, Galerie m, Bochum
Radar II, 2019
Details
Radar II, 2019
Details
During my research trips to the archipelago of the Vesterals north of the Arctic Circle and Svalbard in the Arctic, I was able to visit two of the three most important observatories for remote sensing in Northern Europe. At the Andøya Space Center in Andenes, NASA and esa conduct basic research in the Earth's atmosphere using radar and lidar, in cooperation with the stations in Longyearbyen on Svalbard and Kiruna in northern Sweden. Here, basic knowledge about the nature and the changes of our planet is collected; here, the distortions of the Earth caused by thawing permafrost and retreating glaciers are documented. The composition of the atmosphere is also represented by radar images.
Based on different visualizations of the collected data of the large radar field in Andenes I realized Radar I and Radar II. The smallest divisions of what we perceive with our external senses are squares, triangles and cubes. pixels, voxels and polygons. All surfaces of what our weatherproof eyes perceive can be divided into polygons. The accuracy of the image depends on the resolution, the finer the image, the sharper the reality. The hyperreal measurement by sensors and lenses, however, does not pose a question of truth and content; the angle of the image is only of interest for measurement, not for aesthetics. The properties of the scanned material - in this case Nordic landscapes - can be seen, if you are not wrongly calibrated; you can feel, whether it is massive and heavy, distorted or relationally accurate; we are so used to this kind of representation since the triumph of computer graphics that we can read the object immediately.
At the same time, the representation of a surface as a wireframe is also a picture puzzle. I use a height data set to virtually reconstruct a landscape surface in a 3D program. I transfer a projection of it onto the reflecting material. Finally, by hand, I cut away everything that is not needed for the logic of the motif, thus reducing it to the simplest form of representation - so simple and at the same time so complex, I show a section of the beauty of science.