Work of art by Jan Wawrzyniak
Charcoal and canvas are the basic elements out of which the Berlin-based artist Jan Wawrzyniak conjures nonrepresentational pictorial constructs consisting of white, gray and black lines and planes. The images draw the viewer in, inducing him to read spatial structures into the flat forms as intuition interacts with reason. 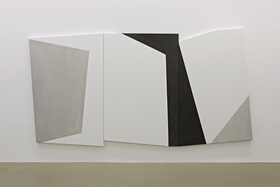 Untitled (13020), 2013
Charcoal on primed canvas
3 parts, each 250 x 167 cm (total 250 x 487 cm)
In monumental triptychs made of polygonal, asymmetrical canvases diverse imagined spaces evolve from both the composition of planes on each individual canvas, as well as between the different picture elements in and beyond each work. A ceaseless perceptual process is set off in which planes tilt forward and deep spaces open up and close themselves off again.
Untitled (14004), 2014
Charcoal on primed canvas
2 parts, each 167 x 55 cm (total 185 x 110 cm)
This aspect of continuous oscillation and precarious instability is more than a mere formal sleight of hand. Wawrzyniak’s works tangibly demonstrate to what extent our perceptual faculties rely on stability and clarity. And this is what makes them so mesmerizing and haunting: the frustration of our longing for a stable and comprehensible world. In this sense, the works open the way not only for a contemplation of human perceptual mechanisms, but also for a reflection on our expectations, experiences and perplexity on all levels of life and society.

Recent works expand Wawrzyniak’s formal repertoire to include non-rectangular canvases, multipart installations and new materials: in his Broken Drawings, for example, the artist uses glazed wooden frames and paper, letting the drawings run across the various levels and onto the surrounding wall. 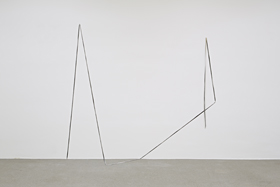 Lynched Line (13007), 2013
Charcoal on primed canvas
approx. 180 x 215 x 24 cm
Lost Drawings
He also cuts selected canvas fragments out of previously discarded pictures and then mounts them directly on the wall as Lost Drawings, which sometimes jut out into the room. Wawrzyniak’s works cannot be readily classified under any specific artistic genre; nor do the lines, shapes and planes come together to form bodies or coherent spaces. Instead, painterly, graphic and lately also spatial, sculptural qualities meld to create pictorial objects that offer a rich visual experience. 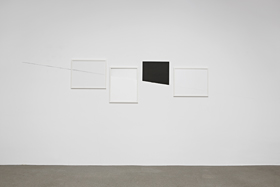 Broken Drawing (14008), 2014
charcoal, paper, wooden frame,wall
4 parts, total 63 x 355 cm
Broken Drawings
In Wawrzyniak’s Broken Drawings by contrast, the viewer is confronted with wooden frames, glass, lines and paper that are overlaid on multiple levels, some of them transparent — in this case the depth is therefore not only an illusion. Even so, the entirety of a work, which at first seems so clear-cut, continually eludes the gaze. No matter which element we choose to focus on, those on the other picture planes then drop out of view. The Broken Drawings moreover challenge in general the isolation and unity of the individual work of art, traditionally manifested in particular by its framing. Here, Wawrzyniak no longer conceives of the frame as a border marking off the work from the outside, but rather as a pictorial element that takes its place inside the work. The Broken Drawings thus deny us not only the spatial illusion of depth but also a clear boundary on the surface of the wall.
Video still and installation view
Drawn by the other, 2014
HD-Video
Drawn by the Other (2014)
The video “Drawn by the other” documents the process of drawing an 18-meter-long line (“Alexander line”) on Shoji paper, the final drawing destined for the exhibition “Broken and Lost Drawing” at the Museum Wiesbaden in 2014/15 and since that time part of the museum’s collection. The artist reflects in this work on fundamental questions arising in the tension between artistic production and its embedding in certain social relations while he also raises elementary issues with respect to the process of drawing itself. For what could be more immediate and essential when it comes to drawing than executing a single line? Jan Wawrzyniak approaches this question in his own unconventional way. 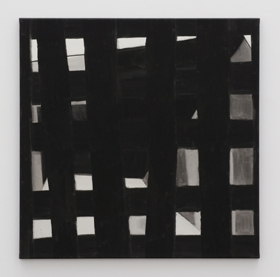 Untitled, 2006
carbon on cotton
80 x 80 cm
Early Works
Jan Wawrzyniak's coal drawings, usually large in format, guide us to undefined, unnamable places. In his reduced pictorial language, skillfully arranged lines and planes emerge directly from the drawing process. The first application of coal on the white-primed canvas sets the course for the further unfolding of the drawing, without the artist following a preconceived plan. Wholly “untouched” white surfaces, shot through with finely nuanced gray tones or deepest black, tilt toward one another, coming forward or receding back into an incalculable depth. Reminiscent of a Kafka tale, they evoke a mysterious atmosphere of unease.