In 2009 Galerie m was showing the exhibition Gotthard Graubner „Chapeau, mon ami“ which
the artist dedicates to the 40th anniversary of Galerie m Bochum and to its founder, his friend Alexander von Berswordt.

Exhibition Work/Series
Exhibition Galerie m 2015
My images come about with the growing light, and are extinguished with the light; beginning and end are interchangeable.
They do not describe a state, they are a transition.
(in: „Europäische Avantgarde“ Frankfurt 1963) 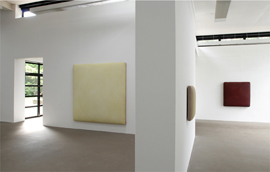 Exhibition Galerie m Bochum, 2009
Movement - out, flowing, streaming, getting held up, being blocked, pushing through, flowing again, finding peace. That is the organic painting process.
(in: Ausst.-Kat. Hamburger Kunsthalle, Hamburg 1975)

For me, the artistic initiative begins when it sets the goal of creating a painterly organism. The painted object in this sense is classified only under the optical dimension, even when in the form of a pillow it also becomes a tactile object; it is still primarily ascribed to visual experience. Non-visual dimensions are not excluded here, for they do extend the scope of experience of the viewer, activating his sensibility.
Color unfolds as a color organism;
I observe it taking on a life of its own, I respect its own set of laws.
(in: Katalog der Kestner Gesellschaft, Hannover, 1969)
Etchings, Monotypes
works on paper
About the 4 monotypes from 2003.
6 Aquatinta-Etchings, Portfolio, 1976
Portfolio 6 Aquatinta etchings, 1976.

Detail, Portrait Graubner from Claus Goedicke
In the early '90th, Claus Goedicke photographed Gotthard Graubner, while working in his studiostudio at prints.