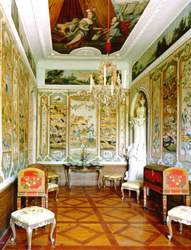 The Japanese Cabinet
in the Eggenberg Castle, Graz, Austria
About my work
What has interested me for a long time are the many layers involved in our observation of an artwork. The quality of a work seems comprehensible at first glance, but in reality we find ourselves looking at it again and again, each time discovering a new facet. When I listen to music, every note should be an unexpected surprise for me.
On sheets of antique parchment, which were often used over and over again, the original letters sometimes still show through. This accretion of multiple layers is referred to as a palimpsest, describing a subtle beauty in which the past and present can be perceived simultaneously. This is the sensibility I wish to represent in my work. The presentiment that the world is not one-dimensional, but rather that the past, present and future and even this life and the beyond are all interwoven can serve as a paradigm for a way of viewing art. One can, for example, create an object whose physical presence is based on its appearance, or, so to speak, on its shadow. 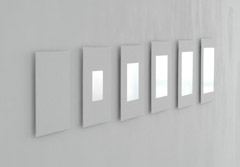 White on Aluminium, 2003
Gesso, Aluminium
6tlg. ges. 28,3 x 194,8 cm
In my new group of works, VOLUMINA, elements with identical surface content are put together as if they were each completely different, same and yet not the same. This ambiguous “gray area” is one property of the Japanese aesthetic with which I identify.
Gardenie consists of two parts: aluminum and marble. The aluminum is polished and reflects its surroundings, but the white, matte marble dissolves into the wall, making the picture invisible. The gardenia flower has an intense scent. The picture ultimately disappears and only the scent remains behind. 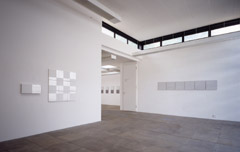 Transitions
Galerie m Bochum 1996
Currently I am designing three-dimensional bodies, turning from an examination of surface content to the content of space. The finished form is precisely defined and has its own inherent logic; the final work however presents itself in a disorganized and almost poetic state. As Sol LeWitt once said: “Some ideas are logical in conception and illogical perceptually.”

The artwork should be: heavy and yet light, white and yet black, bright and yet dark, silent and yet communicative, minimal and yet baroque...