There is a sense of shock: an elderly woman is standing in the limelight. She is naked. The light does not flatter her. It transforms her body into a dramatic landscape of hollows and hills, wolls and folds. Life has left its mark on her skin. It has lost some of its elasticity, it has become loose and soft from years of wear, like a confortable dress. 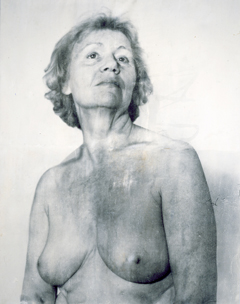 Portrait of Mrs. Manchot, looking up,
1997, silvergelatine and mixed media on canvas 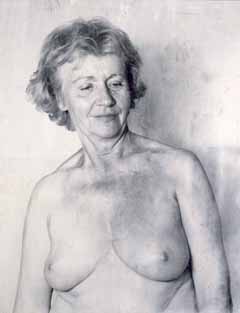 Portrait of Mrs. Manchot, smiling, 1997,
Silver Gelatine on canvas
When in 1995 Melanie Manchot progressed in her photographic observations from her own body, she went in search of an image which is inscribed in the passage of life and which reaches further into the future than her own life. The artist`s curiosity took her into the untamed territory of the future. She discovered the ageing female body and found the unlit side of conventional form of representation. In her self portrait the artist, at that time 28 and living in London, could only be subservient to the standart ideals of beauty present in art for centuries and in advertising for decades. The woman eternally young, radiant and full of energy which covets and is coveted, seductives like Salome and reduced to an object like Marilyn. The fact that the public eye only smiles on the female body during ist period of maximum reproductivity is too narrow a view for Melanie Manchot. Did Eva not leave Paradise a long time ago to lead a real life? Why was there a need for aesthetic and qualitative hierarchies?

The glace into the mirror did not suffice to dissipate aesthetic clichés. She sought the other side of the mask of the ideas of youthful beauty. Manchot had to find an older model to transpose her research to image. In doing so the artist could not borrow the body of an older woman and abuse it optically. She would have fallen prey to the usually consumer behaviour. The model should ideally be closely linked to her own fortune. For this only her own mother would suffice. She agreed. She accepted the unusual challenge of being the model for her daughter`s camera.

In presenting the body which had offered her protection, nourishment and life itself, now past child bearing years yet still full of vitality. Melanie Manchot shattered the boundaries of shame and taboo. With almost scandalous frankness she prensents age unveiled. She robs the model of the aura of matherhood and of anonymity. Trusting a body which does not offer her objectivity. Melanie Manchot through her mother has projected her own identity into the future.