Curtains
One of the projects Thomas Florschuetz worked on during a several-month stay in Los Angeles in spring 2000 was a series of curtain pictures. 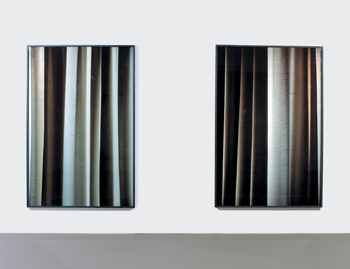 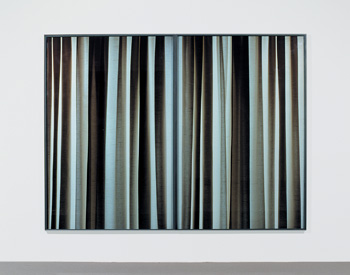 untitled (curtain) IV, 2000
Cibachrome, 2 parts, each 181,5 x121,5 cm
The man-sized photographs that resulted at first give the impression of being non-representational vertical compositions of stripes, but then rapidly reveal themselves to be various folds of the same curtain, plastically modulated by the fall of light and shade. By fragmenting and enlarging his subject – "curtains" – the artist creates an image that is at once abstract and recognizable.

"Curtains" explores the oppositions between "before and behind," between penetration (of light, of the viewer’s gaze) and concretion, the impenetrable. The images evoke the tension between what is here, inside and the invisible, curtained outside, with the curtain acting as shield between us and that which is invisible or should not be seen. A melancholy mood runs through this irresolvable back and forth movement between the two poles.

Here we find photography parading the significance of its ability to create images using light, in the classical sense. And yet, rather than getting caught up in the picture-making technology behind the photo, the observer is free to enjoy the aesthetic sensation that comes to the forefront. Content and form are interdependent here in a subtle way, each with its own life and yet at the same time necessitating the other.

Eugen Blume begins his commentary on Florschuetz' art, "The Hands' Soul," by remarking: "Technology recedes in the face of the images' commanding presence. The question of material takes second place. And the answer is easy: they are photographs." (Eugen Blume, "The Hands' Soul," Budapest 1998)

This dialectic is at the heart of one level of meaning in Florschuetz' photographs. It is found in the way the subtle paths of light and shadow make the curtains visible, in the way the transparency of the petals is evoked in his series of "Flower Pieces," in the way the texture of the clouds in the cloud pictures seems at once condensed and dissolved – with such incredibly fine nuances, these can only be photographs.