Photographic series by Thomas Florschuetz
Thomas Florschuetz is one of the most important photographers of his generation. He has developed an outstanding photographic approach that focuses on the physicality of his subjects. The fragmentary view of the motifs offers various new ways of perception. The photographs do not document the subjects, but rather manifest a new definition of them within the parameters of individual experience. The reception of his works draws upon the fragmentary viewing process and stimulates a creative examination of the objects seen in the picture.

Exhibition Work/Series
Untitled (Framing) 05, 2019/20
Framing, 2019/20
The Dominican priory of La Tourette near Lyon, built by Le Corbusier in the late 1950s, provided Thomas Florschuetz with the motifs for his Framing series from 2019, which shows significant details of the architecture in reduced images

Osterspaziergang 12, 2020
Osterspaziergang (Easter Walk), 2020
The series Osterspaziergang was created in the spring of 2020 during an extended walk on Berlin's Museum Island, during which Thomas Florschuetz discovered a veiled sign which he immediately photographed.

Untitled (Projection) 03, 2020
Projection, 2020
The series deals with how we perceive projected light, which depends on the incidence of the light but mainly on the nature of the projection surface.
Untitled (Jaca) 02, 2010/20
Jaca, 2010/19
The Jaca series focuses on the impressive jackfruit, which the artist stages from different angles. He thus opens up an intriguing push and pull between the familiar and the foreign, the fruit itself and its representation.
K52 05, 2013
GLASS, WATER, TRANSPARENCY (1990-2013)
Thomas Florschuetz’s works from the series Glas/Wasser and K52 aim to capture the unique appearance of the various objects and to represent it in a picture. The photographs of the series Glas/Wasser focus on a glass filled with water and in some cases ice cubes. Thomas Florschuetz investigates here the phenomena of light, color, mirroring and reflections on the technical as well as the compositional level. Blurred patterns of colors and shapes feature in the images of the series Untitled (K52). These photographs show the view directly out of Florschuetz’s frozen and slowly thawing studio window. In some pictures the ice forms a craquelure pattern on the glass, or the view outside through the window shimmers indistinctly through a fogged surface. Outside and inside condense atop the glass, like on a ground glass screen. Whereas in the “Glas/Wasser” series the gaze is directed at, and into, a physical object, in this second group of works the eyes wander instead from interior to exterior. Florschuetz already displayed an interest in the window as motif in the late 1990s with his extensive series Multiple Entry. Here, the inward-opening, double-leaf windows divide the pictorial space into a grid-like structure in which staggered views through the glass and reflections off it are layered in space. Some of the planes reflect the outdoors while at the same time affording a view through to the inside, thus transfiguring the real spatial situation.
Untitled (CC) #06, 2010
ASSEMBLY // ENCLOSURE
Thomas Florschuetz’s interest in objects, buildings and places has lead to a large number of works titled Enclosures. The term Assembly, as the artist names the group of works, refers to Florschuetz’s approach within this series: The chosen perspectives construct new views of the buildings but at the same time analyze and structure them. Since his first Enclosure-series about Mies van der Rohe’s German Pavilion in Barcelona in 2001, Florschuetz has photographed various buildings by modern architects, such as Le Corbusier’s Notre Dame du Haut in Ronchamp (2002-2004). Florschuetz has tracked buildings by Le Corbusier and Louis Kahn in America and India. Beyond the interest in modern forms of architecture, Florschuetz alludes to political and societal aspects in his series about Palast der Republik in Berlin (2005-2008) or the planned city Chandigarh (2010-2013).
Enclosure (GC) 02, 2013/14
In 2013 Florschuetz took photographs of an architecture model of a club house designed by Ludwig Mies van der Rohe. More than 80 years ago, Ludwig Mies van der Rohe took part in a competition for the design of a club house for the newly founded Krefeld Golf Club. Due to the Great Depression however, the house was never built. In 2013, Mies’ design was finally put into practice in the project MIES 1:1 the Golfclubproject at the initially planned site on the outskirts of Krefeld. Due to his long term interest in the architecture of Mies van der Rohe, Thomas Florschuetz visited the model several times and developed the stunning series Enclosure (GC) (2013/14). 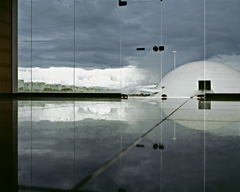 Enclosure (Brasilia) 06, 2008
Enclosure (Brasilia) (2007/08) shows fragments of Brazil’s capital Brasilia, which was planned on a drawing-table by Oscar Niemeyer in 1956. Florschuetz’s compositions focus on unusual parts of the buildings and highlight symmetry and regularity as well as boundlessness and the gigantic scales of the architecture. 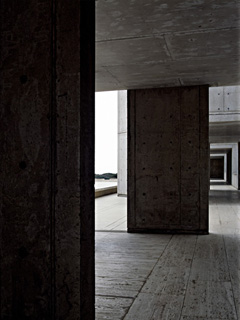 Enclosure (La Jolla) 02, 2007/10
The photographs of the series Enclosure (La Jolla) (2007/2010) show the Salk Institute for Biological Studies in La Jolla, a district of San Diego/ USA. In 1962/63 the architect Louis Kahn planned the building that completely consists of fairfaced concrete. In the course of picking up the rational rhythm and the vistas of the architecture, Florschuetz’s abstract photographs visualise the power of perspective. As a genuinely photographic mean of design, perspective in Enclosure (La Jolla) evokes an impressive play on shadow and light, weightlessness and gravity. In front of the large-size photograph the viewer therefore becomes aware of his own physicalness. 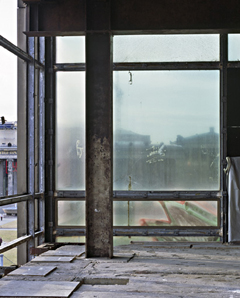 Untitled (Palast) 55, 2006/13
In Germany, Thomas Florschuetz developed an intense interest in the Museumsinsel in Berlin. In 2006/07 he took photographs of the Palast der Republik in the course of its demolition for the series Enclosure (Palast). 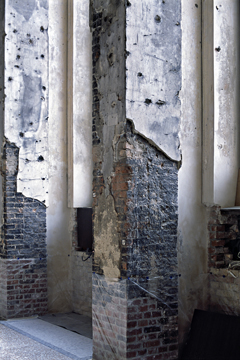 Enclosure (Neues Museum) 17, 2009/2010
2009/10 Florschuetz photographed in Neues Museum during its renovation by David Chipperfield. The series Enclosure (Neues Museum) focuses on the interplay of the different layers of the architectural substance, consisting of ancient columns and renovated walls that partially still show marks of the wars.
Enclosure (CC) 31, 2010/11
Since 2010 Thomas Florschuetz has been frequently photographing buildings in India that were built in the context of different power-political or economical situations. The photographs from the series Enclosure (CC) (2010/13) show the “Capitol Complex” which is the palace of justice and the domicile of the parliament in Chandigarh. The building was designed by Le Corbusier in the 1950s. The “Capitol Complex” is an important building since it functions as a symbol for the democracy of free India.
Enclosure (M.O.A.B.) 03, 2010/13
The photographs from the series Enclosure (M.O.A.B.) (2010/13) show the Mill Owners Association Building in Ahmedabad. The economically important building was also designed by Le Corbusier in 1951 and is the domicile of the Indian textile trading business. Florschuetz photographs deal with the open building technique of the architecture and its combination of different construction material.
Enclosure (TM) 25, 2010/13
The photographs of the series Enclosure (FS) (2010/13) show buildings of the Indian city Fatehpur Sikri, which was the capital of the Mogul Empire of the emperor Akbar between 1571 and 1585. Florschuetz concentrates on the Jali, a typical architectural element of the palace’s wide courtyard. The lattice-like, ornamented elements are used as windows, partitions or balustrades. Working with strong backlight, Florschuetz makes the scenes behind the Jali visible and emphasises its transmittance. This leads to associations of the interior and exterior as spatial parameters.
In the series Enclosure TM (2010/13) which shows the Taj Mahal in Agra, Florschuetz continues working on the Indian Mogul Empire and the Jali. The impressive dimensions of the Taj Mahal still commemorate the fact that Agra was the capital of the Mogul Empire between 1526 and 1648.

Untitled #14, 1986, 2 parts
frühe Körperbilder
OBJECTS // BODIES
Florschuetz’s oeuvre commences with fragmentary photos of his own body taken between 1980 and 1990 and known as Early Bodyfigures. They work with light and reflexes on the skin and parts of the body.

Untitled (Plexus) VII, 1993
In 1993/94, the artist radiographs bodily parts and thereby transcends our conceptions of the body in his so called Plexus-Works.
Untitled (Orchideen), 2000
Since the end of the 1990s, a comprehensive cycle of Ricochet - Flower-Pieces, 1997/2000 evolves followed by a series of Curtain-Pictures, 2000 and the video installation Eyes - both were shown at Galerie m Bochum in the exhibition Don't look now in autumn 2000. Those works, too, veer away from the original subjects by fragmentarily examining the particular bodies. Again, the compositional tension is the key here.

Untitled (Valkyrie) 11, 2007/09
Florschuetz continues working with this pictorial concept in the series ohne Titel (Jets) (2006/09). The fragmentary views of old fighter jets and helicopters at Aerospace Maintenance and Regeneration Center (AMARC) in Tucson/ Arizona have a strongly physical appearance.
Untitled (Belgravia) 04, 2005
The photographs of the series Belgravia (2005) show the candelabrum at the residence of the German ambassador in London. Viewed from below and in strong contrasts the object seems monumental.