Photographic series by Claus Goedicke
"Classical still-life painting has taught us to inquire into meaning behind the objects depicted. (...) In the modern era this aspect has lost importance. The still life has increasingly come to serve as a means for investigating aesthetic issues, such as the relationship of space to plane, of form to colour. Claus Goedicke’s work stands in this modern tradition. Oscillating between object photography and still life, he succeeds in combining the means of the photographic medium with the possibilities of the painterly composition, as well as in translating the types of imagery found in advertising into his own, unique visual idiom. Using the means of colour photography, he invastigates the relationship of forms to plane and space, of line to volume, of image to reflection, of light to shade, as well as the great potentials contained in colour combinations, contrasts and harmonies."
Kurt von Figura, Franz Joseph van der Grinten: Preface, in: Ausst. Kat. Kunstverein Göttingen, Museum Schloss Moyland 2001: Claus Goedicke. p. 7.

Exhibition Work/Series
Eau de Cologne, 2013
From the series some things
C-Print, framed
59,4 x 42 cm (62 x 44 cm)
Some Things
The protagonists in Claus Goedicke’s (*1966 Cologne) pictures are for example a carrot, a used dishrag or a blood unit. They are placed centrally in his large-format photographs, resting on familiar but undefined surfaces. The concentration on an isolated everyday object gives the viewer a startling close-up view of things we have never scrutinized this carefully before – either as a whole or in such detail. We are suddenly brought eye-to-eye with our understanding of these ordinary things, our relationship to them, with memories and associations. Thus depicted, the items prompt us a desire to investigate their material presence, their symbolic character and their history for us personally.

The complete images of the Series Some Things 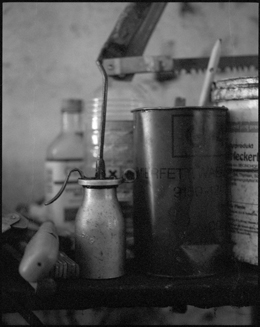 Claus Goedicke
Schmierfett, 2012
From the series Köhles Schuppen
Archival Pigment Print
ca. 18 x 22,5 cm (21 x 29,7 cm)
Koehles Schuppen
"The photographs from the series ‚Koehles Schuppen’ are the essence and at the same time the converse of the images of staged things in my oeuvre.
In the pictures of the shed you find a different order, another light and atmosphere. It was really fascinating for me to discover a foreign place, which is not my studio and where I am not choosing but finding things that someone else arranged. It is another way of seeing and it opens up various possibilities of perception." 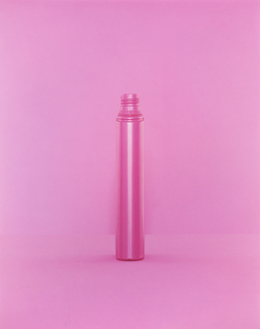 XI-518, 2003
C-Print, Diasec
245 x 115 cm
Monochrome
Claus Goedicke depicts everyday objects and is interested in how the object relates to the pictorial space, and coloration likewise plays an essential role, expressed in a special way in his monochrome pictures (2001-2003).

"The plastic containers are the protagonists in my research into the possibilities of color in photography."
Claus Goedicke, 2016

The reduction of the image elements and the subtle pictorial information provided enable us to focus on the themes of color, form, light and materiality.

Still lifes
"The actors in Goedicke’s still lifes come from an arsenal of bottles and caps that the photographer has collected over the years. Each picture is the result of a long process of feeling fort he formal and tonal equipoise between the single objects. There are some pictures of single bottles, but the general rule is groups or ensembles where it is a matter of correspondences: how should they be related with one another, where should they be positioned in space? But what interest Goedicke more tham amything else is how the putative identity of the single object is altered when it enters into a dialogue with others, and what happens when, say, the background changes? These seem to be formal questions but behind them the fundamentally questionable nature of reality looms. By that he means the process of constant change where the visible is in a permanent state of flux for which we have no concepts, know no reasons, but for which, nevertheless, modern art by trying many and varied approaches has developed a pictorial language."