Series by Anja Bohnhof
Anja Bohnhof (*1974, Hagen) lives and works in Dortmund. After her photographic training, she studied at the Bauhaus University in Weimar. Since 2009, she has created the series "books for sale", "Bahak" and "Krishak", among others, in the streets of Kolkata and on the rice fields of West Bengal. They ask questions about the social content of history, reality and identity.

From 2014 until 2018 Anja Bohnhof made one of her most complex and elaborate series: "Tracking Gandhi", for which she travelled to numerous places in India, Bangladesh, South Africa and Europe that are important for the life and work of Gandhi. The project resulted in exhibitions and an extensive book. The publication has received several awards. 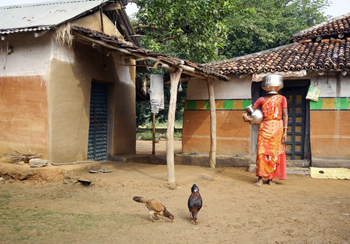 from the series The Last Drop, 2019
The Last Drop 2019
Access to clean water was recognized by the United Nations as a global human right in 2010. The problem of water availability and distribution is particularly severe for underprivileged population groups. There are no wells or alternative water storage systems available in almost 300,000 Indian villages. Over 160 million Indians currently have no access to clean water.
Anja Bohnhof visits 12 villages in the north of West-Bengal and shows how the life of women and girls is affected by the lack of clean water supply. 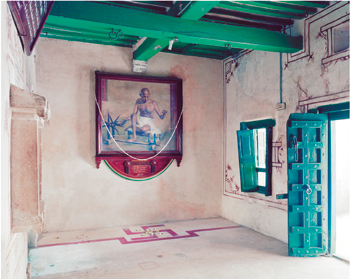 from the series Tracking Gandhi, 2013-2017
Tracking Gandhi 2013-2017
The photographic project “Tracking Gandhi” travels to the places in India, Africa and Europe that marked crucial stages or watersheds in Gandhi’s private and public life. It is a complex, multilayered journey. On the one hand, the chronological arrangement of the imagery– from his birthplace in Pordanbar in what is now the Indian state of Gujarat to the site of his assassination in New Delhi –allows the fascinating trajectory of Mohandas Karamchand Gandhi’s life to emerge. On the other hand, the photographs visualise a journey through time, since they make visible the sense of tension inherent in the places depicted and engendered by the relationship between their modern-day appearance and their historically charged atmosphere. 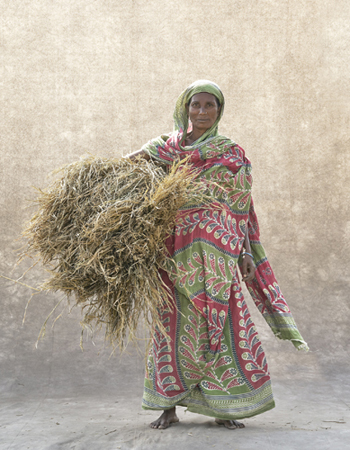 KRISHAK- Sufiya Bibi, 2018
KRISHAK - YIELD OF TIME 2017/18
India’s rural areas – particularly outside high-yield regions like the Punjab – are frequently characterised by a very simple, almost archaic way of life. Small farmers, in particular, do not have the option of achieving improvements in yield through the capital-intensive use of machines and fertilisers and are unable to extend their basis of production by purchasing land.
In Bengal too, not far from the megacity Kolkata, rice is still grown and harvested just as it has been for centuries. The harvesting of rice plants and the threshing of the panicles is done almost exclusively by hand. People carry the harvest to the threshing floors in the village on their heads or transport it using bicycles or ox carts. At first sight, there is little to be seen here of the rapid pace of India’s dynamic economy.
from the series Mohila, 2017/18
Mohila 2017/18
The series Mohila (hindi & bengali term for woman) contains 70 pictures of women during rice harvest recorded on the fields or in direct proximity of the treshing spots at the village outskirts with the use of a mobile studio.

from the series Bahak, 2012
Bahak 2012
The bengali term for carrier is "bahak". No load seems too heavy or too large to be manhandled through the narrow, crowded streets of Kolkata (Calcutta). Whether their burdens are carried on their heads, or on a yoke over their shoulders, on two- or three-wheelers or on a hand-drawn rickshaw, all manner of goods and essentials-furniture, building materials, groceries, books and coal-are all humped, hauled or carted as they are shifted from one place to another in ways that are at times quite risky!

"I set up a makeshift studio along the edge of these streets for a few weeks and asked some of these carriers to pause for a moment so that they could be portrayed individually, detached from the constant commotion of the bustling crowd-an expression of astonished admiration at the visible artistry contained within the motion of things."
Anja Bohnof
from the series books for sale, 2009
Books for sale 2009
Flying in the face of pronouncements declaring that the arrival of the digital age heralds the imminent end of the era of the printed book, millions of publications are piled up at the printers' in Kolkata's university quarter. The metropolis is India's third largest software exporter, so it plays a significant part in the developments that have led all across the world to the digitization of more and more areas of our lives. For all that, there is still a great deal of respect for the printed word. For West Bengalis, who have lived in poverty for many decades, material goods have a fundamental value and are prized to an extent that is inconceivable in affluent societies.

"These bookshops are central to my photographic work. By applying formal criteria involving the use of large-format photographs, single objects become the centre of focus and direct comparisons can be made between all the pictures within the series."
Anja Bohnhof