Works of art by Lena von Goedeke
Lena von Goedeke´s works - painstaikingly manufactured paper cuts, penderous, while seemingly hovering landscapes made of concrete sand, delicate drawings, dragging themselves across the entire wall - have to be witnessed in original to be comprehended. The fine, dusty sand, that ripples down from the side, leaving a barren landscape; the glitter and shine of reflector foil cut into sculptural patterns: The material, it´s textures and surfaces mesmerize the gaze, raising contradictions and questions.

Exhibition Work/Series
Intrusiva, 2022
Intrusiva
The bronze named Intrusiva, an arm made of bronze, is covered with deep black patina. On the vulnerable inner side of the wrist, cuts and cracks are visible, which are imprints of volcanic rocks from Iceland. The imprint gives the appearance of veins, which is in direct contact with the flowing lava.
Since 2020, Lena von Goedeke has been working with lava and lava rocks, especially in Iceland. Several trips there inspired her, among other things, to the work Intrusiva.

Aggregate, 2022
Aggregate
DThe glass works of the series Aggregate refer to the extraction of cores from the Arctic ice and the scientific analysis of the layers, which are "climate archives" documenting the climatic evolution of the Earth over millennia. In the process of creating her works, the artist has added materials to her objects that make up their existence, such as hair and breath, thus creating her very own archives.
With her glass works of the series Aggregate, the artist deals directly with the current issues of our time regarding climate change. She also questions her own existence and the effects and permanence associated with it. 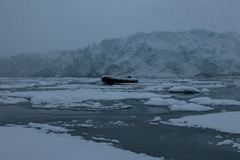 Habitable Zone II, 2019
Arctic Circle
For three weeks Lena von Goedeke traveled around Svalbard (Spitzbergen), while spending two of them onboard of the Barkentine Antigua, together with 34 people of different disciplines. In The arctic blog (in german), the artist gathered all of her impressions and experiences she made during her travels.
Detail Lot VI, 2018
Lots
Lena von Goedeke first designed the three-dimensional web of silhouettes with the help of a computer program used to generate virtual worlds and then assiduously cut the negative areas out by hand.

Detail Radar II, 2018
Radar
As one of the first remote sensing techniques of mankind, the radar method as a satellite-based georadar has a special significance in the exploration, measurement and documentation of the earth's surface and crust. In contrast to other techniques, the radar is able to scan the earth's surface even on cloudy days or at night, and has an advantage over purely optical methods such as triangulation or even the human gaze. 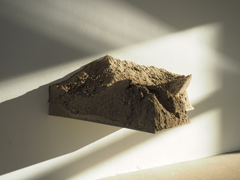 Zombie (7), 2018
Zombies
A sensory level is precisely so central to Lena von Goedeke’s works, which is why the objects and their nature demand such close scrutiny. It is all about their existence in the here and now, about encountering them face-to-face. 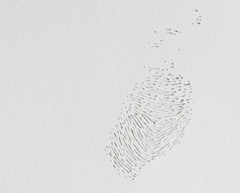 Detail Certificate, 2018
Certificates
The genesis of Lena of Goedeke’s works is closely linked with electronic data processing. This is symbolically conveyed in the Certificates with a fingerprint as reference to our existence between the analogue and the virtual worlds: the digital fingerprint that tracks our online activity, the unlocking of a touch screen and the touch screen as such, the finger that grants us access to a virtual world where, paradoxically, at the moment it is “entered,” the tactile level, along with so many other levels of sensory perception, becomes meaningless. 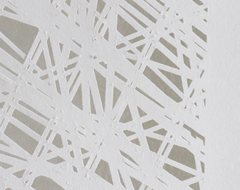 Detail Papercut, 2018
Papercuts
In this era of digitalization and artificial intelligence, Lena von Goedeke explores the merging of analogue and digital technologies and their perception. The discrepancy between the content of our subjective experiences of the two different worlds is made manifest in her objects, related as they are to both, thus stimulating thinking on many different levels.
Wear 2, 2019
Ink drawings
The ink drawings from the series "Kenzo", "Wear" and "Astra" are based on the same grid. The works each go through different development processes in the area of digital processing and realization on paper. In the process of creation between manual design and automated implementation, hardware, the artist's handwriting and the plotter leave their own traces. Deviations from the regularity of the original pattern raise questions of standardization, perfection and individuality and point to the vivid blurs in the translation of ideas into the digital.

"So there are flaws where the pen did not rest completely due to paper waves, weak lines where the ink did not run fast enough or "wipe traces" where fluff gathered at the tip of the pen. In this way my computer infrastructure constantly produces unique specimens, the more energy I put in by hand to work as accurately as possible."
Lena von Goedeke, 2020