Antje Dorn
Paper Works
exhibition gallery
Press Release
Galerie m Bochum is presenting from 8 May to 11 July 2015 works on paper by the Berlin artist Antje Dorn (b. 1964 in Aachen). Dorn’s “Rare Animals and Numbers,” “motorgirls” and “Imbisse” series are being shown as part of our “Feature” series of exhibitions.

The title “Rare Animals and Numbers” (2006) succinctly describes the main motifs of these ink drawings. Curious four-legged creatures resembling dogs, sheep, donkeys and other familiar animals share the white paper plane with numbers from 0 to 9. In our rational understanding, two completely different “worlds” collide here: that of living beings and the abstract, mathematical realm of numbers.
Dorn harmonizes these opposing themes in her own special way by lending the numbers the mass and weight of objects while the animal forms become mere immaterial graphic outlines. Rendered in this fashion, the “zeros,” “ones” or “eights” coexist side-by-side with the fleet-footed creatures, interrelating with them in a peaceful-seeming symbiosis.


The first driver’s license in history was acquired by a woman. Nevertheless, driving in the early days of automotive history was mostly the preserve of men. Clichés and prejudices thus soon abounded about women’s relationship to cars, also manifested in pictures.
Antje Dorn takes a humorous look at this genre in her gouache series “motorgirls” (2000/01), displaying a number of different facets. Instead of trying to look alluring, Dorn’s “motorgirls” appear confidently and sometimes helpless at the wheel of a car or doing their own repairs – in comical exaggeration.


The series of ink drawings titled “Imbisse” (Snacks, 2003) shows individual buildings, sometimes with the character of objects and in other cases with a futuristic or improvised look. Large billboards on their facades or roofs are emblazoned with words referring to “beans,” “Tomatoes,” “blaukraut” (red cabbage) or other staple foods, alluding to the possible function of the fantasy buildings as production sites or points of sale. Dorn explores here buildings typical of the cityscape whose undistinguished forms are often at odds with the products they advertise. The disproportionate emphasis of the product names reveals the absurdity of their marketing.


The three series on display all demonstrate Antje Dorn’s consuming interest in the imagery that surrounds us in our daily lives. She toys with our viewing habits by changing the contexts of certain pictorial elements, thus allowing us to see them with new eyes. Through humorous exaggeration or by taking things to absurd extremes, she thus sharpens our awareness of many aspects of our everyday culture. 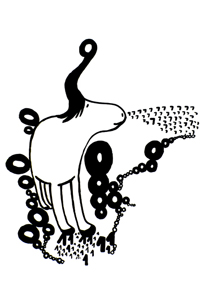 from the series "Rare Animals and Numbers" 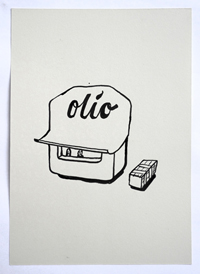