exhibition gallery
Press Release
Galerie m is kicking off this year’s exhibition program with an unusual installation: in the so-called “Feature Room” with its less than 5 square meters of space, twenty-four photographs by Dirk Reinartz (b. 1947 Aachen, d. 2004 Berlin) are on view. Under the common theme “Deutschlandbilder” (“Images of Germany”), works from seven different series have been brought together here, ranging from early shots of Hamburg’s trendy St. Georg neighborhood (1981) to color photographs from the series “Innere Angelegenheiten” (Internal Affairs), which spans the years 1989 to 2002.

Dirk Reinartz, who studied with Otto Steinert at the Folkwang School in Essen, made a name for himself with photo reports for Stern and ZEIT magazines in the 1970s and 80s. In these, and also in freelance works produced during his travels through Germany, he engaged intensively and tirelessly with his home country, always on a quest to uncover the true nature and self-image of its inhabitants. His photographs reflect the issues of the day and their impact on specific areas, such as Germany’s division into West and East or the closure of the steelworks in Rheinhausen.
But Reinartz also frequently photographed places and details that can be seen in their singularity as “typically German” – sometimes exposing their contradictions in humorous fashion. Starting in 1985, several books of Reinartz’s photographs were published, including “Kein schöner Land,” “Deutschland durch die Bank / Benchmarking in Germany” and “Innere Angelegenheiten.”


The current exhibition at Galerie m juxtaposes photos from various series to trace common themes and motifs that Reinartz continually revisited throughout his career. The installation of pictures densely arranged on the wall thus becomes a kaleidoscope, continually suggesting new connections and angles while coaxing the viewer to delve ever deeper into the photographer’s work. 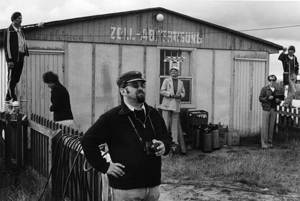