Photographs by Dirk Reinartz
Photographer Dirk Reinartz, born in 1947 in Aachen, died in 2004, realized various photographic projects that were published in book form and exhibited all over the world. His subjects included critical observations of his home country, scenes from New York and portraits of artists. His photographic documentation of artist Richard Serra`s worldwide sculptural projects resulted in several books (see Publications).

We would like to thank Steidl Verlag for the kind permission to reprint the press texts on Dirk Reinartz.

St. Georg, 1981
Hamburg - St. Georg (1981)
Dirk Reinartz took the pictures from the series for the publisher Merian. It became a characteristic portrait of St. Georg, a district, which underwent an important change since 1981. 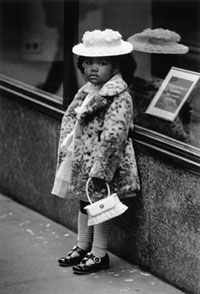 New York (1974)
These vintage prints, never before seen in public, were made from photographs the artist took during two trips to New York in 1974. Now visitors can view the entire series at Galerie m.
Viewers will encounter here expressive faces and fascinating views of the US metropolis, accentuated by the play of light and shadow in the black-and-white photographs. The pictures are still capable today of immersing the viewer in the atmosphere of 1970s New York.
Reinartz sought out places where people wander the streets lonely and silent, with a resigned air; or where, caught behind shop windows, they turn their backs on others. These city dwellers have a haunting kind of melancholy and speechlessness that appears to permeate life in New York. The skyscrapers rise up steeply, turning the streets into dark canyons – lined up one after the other in the fog, they intensify the misery evident in what was once the land of opportunity.
In the midst of the oil shortage, the Vietnam War and the associated recession, with rising unemployment and a never-ending series of political scandals, Americans in the 1970s found themselves facing a deep identity crisis. Dirk Reinartz captured this mood in sensitive pictorial compositions that not only show the pervasive tristesse of the times, but also include snapshot-like character studies that reflect back his warm and affectionate gaze.
Further information 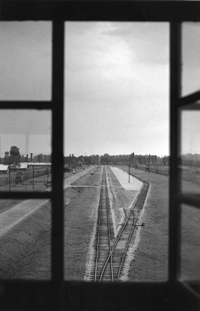 Auschwitz II/Birkenau, Rampe, 1993
totenstill
In 1994 Reinartz published the photo-documentary deathly still, a pictorial analysis of the Holocaust that evokes memories of that tragic era while prompting reflection on present-day conditions. He took the photographs over a period of eight years in 26 former German concentration and death camps. In observing these images of what the sites look like today, our sense of alienation comes not so much from the immediate immanence of the motifs themselves, but rather from the ordinariness and apparent meaninglessness of woods, fields, roads and overgrown walls that were once mute witnesses to unspeakable horrors. Our sense of unease comes from knowing that these scenes were photographed in concentration camps, with all the associations thus evoked.
Deathly still was exhibited for the first time in 1994, at Galerie m Bochum, and has since been on display in more than 25 museums all over the world. A book of the same name was published by Steidl Verlag, Göttingen.

Meret Oppenheim, 1982
artist portraits
Reinartz` artist portraits manifest an eye that approaches its subject with openness, knowing how to subtly capture the moment when photographer and subject connect. Artists such as Joseph Beuys, Hans Hartung, Emil Schumacher or Meret Oppenheim are shown in intimate close-ups, gazing confidently into the camera while still retaining an enigmatic air. The portraits were commissioned by Art magazine. The first book of 114 Artist Portraits was published in 1992 by Steidl, Göttingen.

Elbufer Grünendeich, 1979
Kein Schöner Land. Deutschlandbilder
The photographs in the series Kein schöner Land. Deutschlandbilder were taken from 1978 to 1987. In the book of the same name, published in 1989, Norbert Klugmann describes the “public devastation of the Federal Republic of Germany,” which bestows on us the “view of desolate houses and gardens” and that we can only bear because we have learned to simply ignore it. This “cold, brutal architectural anti-culture” is omnipresent in the black-and-white photographs of Dirk Reinartz. He documents here an evident “fear of the anarchy of green foliage” marked by urban development measures that seem to arise from a deep-seated need for control and order. 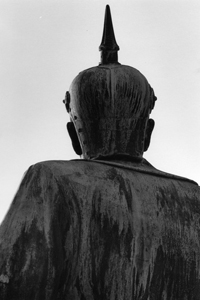 Goslar, Bismarck, 1989
Bismarck
Otto von Bismarck dominates the public realm in Germany like no other statesman. Almost every city boasts a monument to the unifier of Germany, usually over life-size and placed prominently in the city center, most of which were erected in the 19th century. In the meantime, these cityscapes have undergone fundamental transformations. Dirk Reinartz succeeds in subtly conveying the interplay between each monument and its surroundings. In some towns, these testaments to Germany’s past seem out of place, even ludicrous. This disjuncture often results in an alienation of the object, the loss of its meaning as symbol in today’s consciousness. In this sense, these photographs can serve as a springboard for reflecting on how we handle our cultural heritage in the public space.
further information 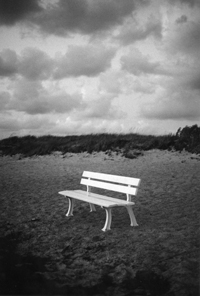 
Bismarck in America
Numerous streets and public buildings have been named after Otto von Bismarck. This includes a city in the northwestern USA, which Dirk Reinartz noticed on weather maps shown on American TV. Reinartz used the occasion of the 100th anniversary of Otto von Bismarck’s death to visit and photograph the city that bears his name, accompanied by author Wolfram Runkel. The resulting photos, published in 2000 in a book titled Bismarck in America, show a typical American small town in which there is no monument to the Prussian politician, but where his name is omnipresent. Dirk Reinartz does without any spectacular motifs or artificially staged tableaux, approaching his subject instead with the attitude of a curious passer-by, patiently exploring his surroundings. With his carefully selected framing of the image and the order imposed on each composition, Reinartz manages to capture the essence of this American town in an inimitable fashion. Beyond this, it is the eye-catching details within the overall picture that make for the special appeal of this series.

Richard Serra
Richard Serra - Sculpture
The meeting between the photographer Dirk Reinartz and the sculptor Richard Serra in 1983 soon gave rise to mutual admiration. Reinartz began traveling all over the world to photograph Serra’s landscape installations and public sculptures, an activity he pursued until his untimely death in 2004. The fascinating black-and-white photographs became the basis for sculpture books that Reinartz compiled in close cooperation with Serra, for example
"Afangar", 1991, "La Mormaire", 1997, "Lemgo Vectors", 1998,
"Te Tuhirangi Contur", 1999-2001. For the catalogue raisonnée
"Sculpture 1985-1998", Reinartz spent long years journeying to far-flung sculptural installations across the globe in order to document them for this publication, today long since out of print. Richard Serra described this in a conversation with Lynn Cook on the occasion of his retrospective in summer 2007 at the MOMA New York as follows: „Photography is an extension of my eye. Dirk Reinartz became an eye for me. We travelled together a lot and I miss working with him.“
Beyond their documentary value, Dirk Reinartz’s photographs develop their own aesthetic, with an idiosyncratic choice of perspective and the rich nuances afforded by black-and-white photography. The way the photographer chose to depict the individual sculptures mirrors his own subjective experience of the works. Exactly as intended by Richard Serra, Reinartz as observer becomes the moving center of the work, demonstrating to other viewers the diversity of the respective landscape or sculptural space. At the same time, he conveys a deeper understanding of Serra’s sculptural work, with its objects that continually change in appearance, each time challenging the viewer’s perception anew.