In the exhibition "Framing" Galerie m shows photographic works by the Berlin-based artist Thomas Florschuetz (*1957 Zwickau), with whom it has been working for 20 years. Besides the series of the same name, the exhibition includes works from the series Jaca, 2010/20, Konstruktion, 2019, Projektion, 2020 and Osterspaziergang, 2020.

The Dominican priory of La Tourette near Lyon, built by Le Corbusier in the late 1950s, provided Thomas Florschuetz with the motifs for his Framing series from 2019, which shows significant details of the architecture in reduced images. The dynamics of the artist’s compositions are inspired by the lines of the building elements as well as their surface textures, coloring and the momentary lighting situation. Minimal deviations in perspective result in images that appear abstract in large part, the architectural references fading into the background and only remaining evident in isolated areas. The focus thus oscillates between planar composition and depth effect, between abstract picture and a visceral sensation of space.

The Jaca series from 2010 focuses on the impressive jackfruit, which the artist stages from different angles. He thus opens up an intriguing push and pull between the familiar and the foreign, the fruit itself and its representation. The prickly outer skin symbolizes defensiveness and protection, while the view inside the cut fruit reveals its inner softness and vulnerability.

Florschuetz’s latest series, Projektion deals with how we perceive projected light, which depends on the incidence of the light but mainly on the nature of the projection surface. Here, the artist has photographed light falling through the slats of a blind. Perforations in the slats function like lenses that focus the light before projecting it onto the surface behind them – a curtain. By playing with blurring and sharpness, light and shadow, Florschuetz reflects on the very act of taking a photograph, which always involves capturing light.

Osterspaziergang (Easter Walk) explores a single motif: the sign for Berlin’s National Museums in Berlin, provisionally covered with a blue plastic bag, set in front of the James Simon Gallery. Though always shot from the same angle, the sign and its inscription take on a different appearance in each image. Photographed by Florschuetz at Eastertime in 2020, this series is also a record of the first lockdown. An unprecedented situation finds expression in the seemingly helpless gesture of improvised concealment of a sign, at a time when familiar landmarks are blurred to near illegibility by external influences.

In the current show, Florschuetz illustrates once again what photography itself and the camera’s capacity to convey a personal look at the world can actually mean: He shifts through his impressions, intuitively selects those he wishes to share, and in this way creates new contexts and structures. Florschuetz’s photographically constructed images are thus able to offer us fresh perspectives and points of view.
Ohne Titel (Framing) 15, 2019/20 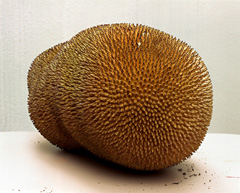 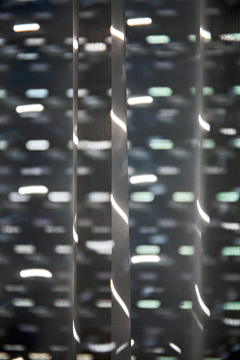 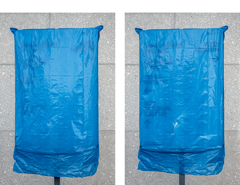