Work of art by Peter Wegner
Statements
"We think we know what a color is, what a word means. But the simplest things elude us. They are contingent, defined by circumstances. A color we consider green becomes yellow or blue based on the colors around it. A word we use everyday falls apart, when we need it, the sound of it suddenly strange in our mouths, its meaning defined only by other words - and how are those words defined? By what authority? Each of us changes from one moment to the next, different versions of ourselves on different days. And so it is in my work. No articulation of form is final. Each part is just a temporary arrangement of materials. Like a stack of paper, like the letters in a name. Nothing belongs to us. Everything comes from somewhere and is headed somewhere else. But for now, just this moment, these things reside in this sequence."

The website of Peter Wegner
Video about Peter Wegner’s work at the Stanford Graduate School of Business’ new campus.
Video of Peter Wegner's lecture Nix, Nada, Nothing at TEDxEast in New York, May 2012. 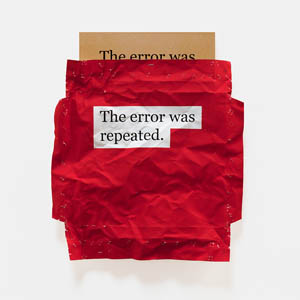 THE ERROR WAS REPEATED
"It’s not uncommon for a mistake to be printed more than once before it’s caught. In a few cases, the mistake has been repeated dozens of times across decades. The Times defaults to the same phrase every time: The error was repeated. This, one might say, is the human condition – to make the same mistake twice. It’s a problem built into being alive." (Peter Wegner)
Further Informations: THE ERROR WAS REPEATED. 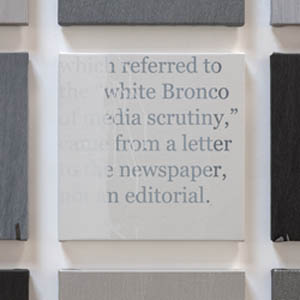 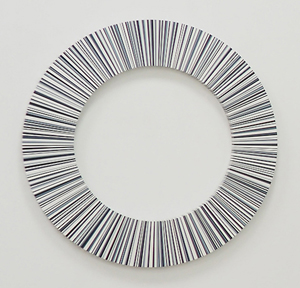 COLOR WHEEL 5, 2015
acryl, alkyd and glue on MDF
Ø 150 cm x 5 cm
COLOR WHEELS
In his series COLOR WHEELS, Wegner works with picture supports shaped like wheels. He creates pulsating discs of color by using thin lines.
The paint is applied to the COLOR WHEELS in fine radial lines. In this sense, they are reminiscent of the schematic color wheels once devised by Isaac Newton and other scientists. By contrast, however, the viewer is left ignorant of the fundamental principle governing Wegner’s COLOR WHEELS. But the sequence of hues is not random: “It was made by the algorithm of me.” (Peter Wegner). Wegner aims with his arrangements to create impressions arising from the direct juxtaposition of contrasting tones. He is interested here in the relativity of color perception. In each COLOR WHEEL, one dominant color is generated by the lines of paint in different shades. The colors that do not belong to the range of the base color serve to lend the surface rhythm, like the blue lines do in COLOR WHEEL 9, for example. The multicolored lines complement each other and form a shimmering wheel that pulls the viewer’s gaze around it in a circular motion. COLOR WHEEL 5 is painted completely in shades of gray. The piece was born of Wegner’s fascination with the scientist John Dalton, who first diagnosed color blindness in 1798. 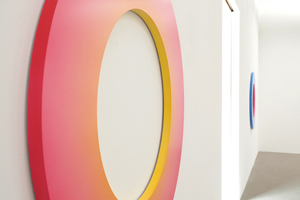 D65
Installation view of the exhibition D65, 2015
D65
For his series D65 Wegner took inspiration from the California sunshine. The radial gradients evoke visions of the glow of the sky at dawn, dusk, and every moment in between. Wegner chose “D65” for the title because it is the abbreviation for “normal light” with a color temperature of around 6500 Kelvin, equivalent to the light on an overcast day. The two shades from which the color spectrum is derived are painted onto the inner and outer edges of the wooden discs. On the surface, Wegner sprays the different shades evenly into and over one another, creating countless nuances of color. The soft gradient, the lightness of the paint application, in which the weightlessness of the spray mist remains palpable, the void in the center of the wheel, and not least the reflection of color onto the white wall draw the viewer’s perception away from the corporeality of the object and towards a more nebulous impression. “D65” is a tribute to light; intangible, atmospheric, and ephemeral: “Air lit by sun in the arc of a day” (Peter Wegner). 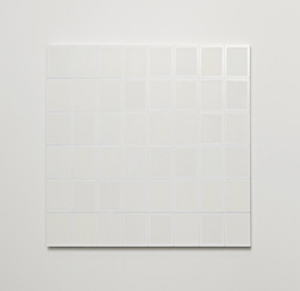 WHITE DIVIDED BY WHITE, 2012
Frosted Alkyd paint on acryl on MDF
122 cm x 122 cm
WHITES
In his series WHITES Peter Wegner works with different "colors", which are all available in the trade as pure shades of white. From the different nuances and the combination of opaque and glossy surfaces, an atmospherically very dense and continuously changing game with light and color is created.
MINERAL LOGIC IX, 2012
cut and stapled mica, 16 x 15,2 x 2 cm
MINERAL LOGIC
The works in the series MINERAL LOGIC are in turn made out of the mineral muscovite. The structure of this natural raw material consists of paper-thin layers that can be separated off from the mass. MINERAL LOGIC showcases the surprisingly aesthetic impact of this material, which is used in industry as an extremely heat-resistant insulation material for high-voltage power lines.
BUILDINGS MADE OF SKY I, 2007
32 color photographs
total: 65,63 x 108,27 inches
"I felt that I had stumbled upon something extraordinary, a secret city, luminous and strange. I wondered if anyone else saw it. Soon after, I began the photographs that would become Buildings Made Of Sky [...]

The important thing, I’ve learned, is to focus on nothing. Believe in it, prefer it, and the building reveal themselves: BUILDINGS MADE OF SKY." 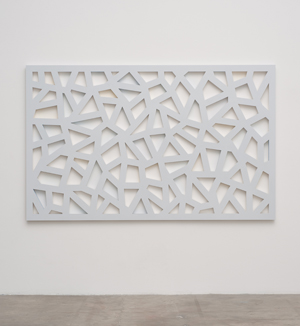 Short Poem About a Cloud, 2010, Alkyd gloss enamel over satin enamel on MDF with glue sizing, ca. 149,9 x 241,3 x 2,5 cm
Short poem about a cloud
"As in so much of my work, most of the action is on the edges. The paint reflects color onto the wall, so in this piece as in misplaced whites, the color is again, in a sense, misplaced, either consigned to the margins of the support or reflected onto the surface on the wall. When I finished the piece, it seemed to have something to do with clouds - the atmospheric event you fly through, or perhaps a digital cloud computing network you upload to. An ambiguous place somewhere else in which to store your memory." (Peter Wegner, March 2010) 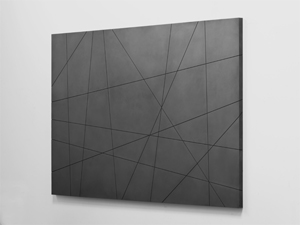 BLACK MAP II, 2012
powdered graphite and seizing
on MDF with kerf cuts
122 x 183 x 3,8 cm
BLACK MAP II
The kerf cuts paint a structure of organized lines into the MDF. The graphite powder makes some cloudy patterns of varying greys on the surface, wheras in the cuts, the powder concentrates and fills the lines with blackness.
Graphite is a Janos-faced material: when exposed to even light, it’s dark color comes into effect. In sided light though, the shiny quality to reflect light changes the surface of BLACK MAP and opens up the formerly dim, near-black work and gives it an atmosphere of multifaceted soft greys, with a silvery glimmer here and there.
The natural developed pattern of the powder is organized into polygonal patterns and quarters by the straight-lined cuts which might continue beyond the border of the quadrat into nothingness. 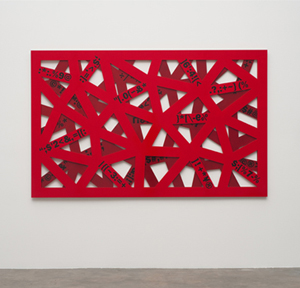 COUNTEREXAMPLES, 2010, alkyd gloss enamel over satin enamel stencil on MDF with glue sizing, 2 pieces, each 149,9 x 241,3 x 3,8 cm
COUNTEREXAMPLES
The title “COUNTEREXAMPLES” suggests that this painting might run counter to something – but counter to what? Logic? Tradition? Common sense? Or does the painting contain its own contradiction, with one layer calling the other into question? We are presented with the opposite of something, like a painting inside out, and from the evidence presented on the wall we are asked to imagine the example it runs counter to. 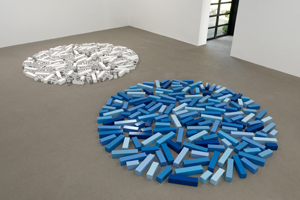 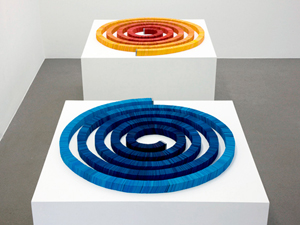 What is more common than paper? It’s in fact possible to realize large scale sculptures made of paper. The result can be seen here. 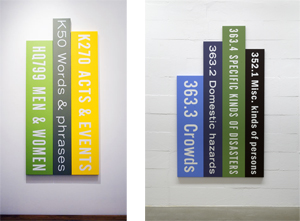 "Even before we learn to speak, we sort the world into catagories: Mom, Dad, house, car, dog, cat. The job never ends. Each of us becomes a library of everything we’ve learned.

[...] The Dewey Decimal System does the job we all do anyway - categorizing - but does it more systematically. (The Library of Congress, explored in related works, uses a slightly different system to do exactly the same thing.)

Each heading uses a word or two to classify millions of books. But words alone are never enough. Sooner or later, code numbers are called in to resolve disputes between categories that seem too broad, to narrow, redundant, ambiguous or overwhise ill-fitting.

These problems are unavoidable. So the systems issue updates and revisions. They invent new categories and sideline old ones - just as we all do in our own lives. It’s a hopeless task, absurd, hilarious. But then again, what else is there?"
SPACE, TIME AND THE WEATHER, 2003
Varnish on wood
40 pieces, total: 96,06 x 314,96 inches
"Blue is the color of everything and nothing. It’s the color of potential: the blueprint of an unbuilt building, the blue line drawing of a graphic layout, the blue chalk of a contractor’s plumb line, the blue screen of a Hollywood montage.

Blue is always something or sometime or somewhere else. And so it is with commercial paint colors, which tell us blue is the color of infinity, the wind and timelessness." 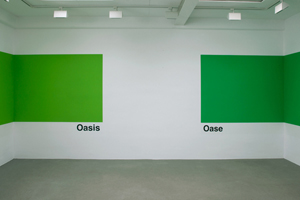 OASIS - OASE, 2012 wallpaint with clear acrylic medium on wall, Diptychon installed, each 162 x 370 cm (197 cm in between)
"The tradition of the monochrome is concerned with transcendence. Think of Malevich or Klein, Rothko, Reinhardt, or Kelly. There's a great yearning toward the spiritual coupled with a renunciation of almost everything else. The monochrome becomes an offering to the god of pure color, pure form. My wallworks are born of a nearly opposite impulse. They don't renounce anything. Instead, they incorporate hardware and existing architecture. You encounter them in unlikely, unlovely, out-of-the-way places. They're improbable. They have an air of casual indifference."
AMERICAN TYPES , 1997
2 vol., 8,43 x 11,02 inches + 5,59 x 7,28 inches
"No articulation of form is final" - this is also valid for the form of the artistbook, for which Wegner finds new definitions. He creates artworks in the form of books, which pick up single aspects and ideas of his work. For more information please click here.