Work of art by Franka Hörnschemeyer

"(...)Franka Hörnschemeyer makes use of sculptural means that could not be more modest and iconographically restrained - often these are standardized formwork elements from the concrete building, which usually define the built space before its creation and remain invisibly inscribed in its cubature.
In many of Franka Hörnschemeyer's works, such elements as mental guidance systems structure the physical space to be rediscovered."
Susanne Altmann, Dresden 2012

Group exhibitionMIRROWS AND WINDOWS, Philara, Düsseldorf
For the group exhibition at Philara, Franka Hörnschemeyer realized a site-specific work. Two cuboids of different sizes are connected and supported by an anhcor rope.
Axiom 420, 2020
shuttering panels, grid elements, anchor rope
exhibition Galerie m
For the exhibition at Galerie m, the sculptor Franka Hörnschemeyer conceived and realized Axiom 420, a complex site-specific work. Geometric sculptures made of shuttering panels and an architectural construction of grid elements are connected and supported by a multiple deflected traction rope.

Video of the exhibition by Donat Schilling 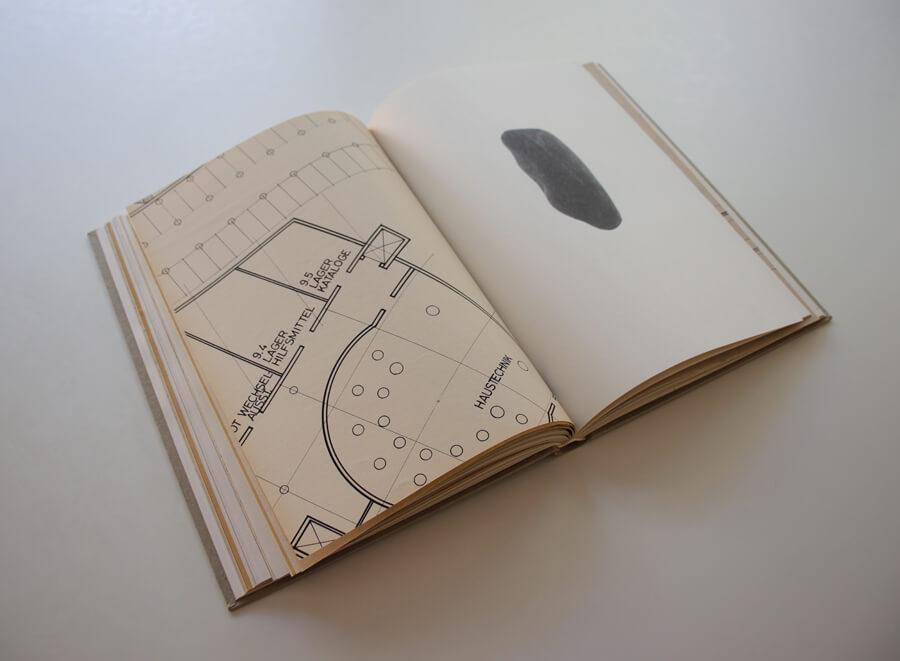 GKF (Gipskartonfeuerschutz) is an extensive and multifaceted complex of works, which finds its origin in a collection of fragmented building plans. They form the basis for the publication of the same name, which is limited to 150 copies, various wall objects and an audio work. 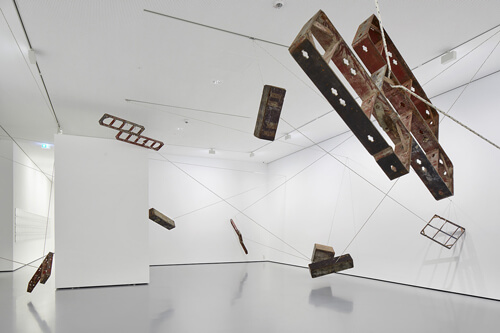 Numerous wall objects from the 1990s are among the earliest works by Frank Hörnschemeyer and bear witness to her intensive and long-Standing involvement with plasterboard - here her interest focuses not only on the materiality of the building material, but also and above all on its function as an information carrier. She explores the nature and context of plasterboard and finds references to cultural, social and economic conditions. One could almost call her a building archaeologist. 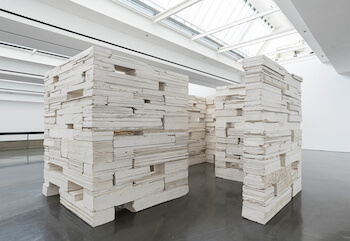 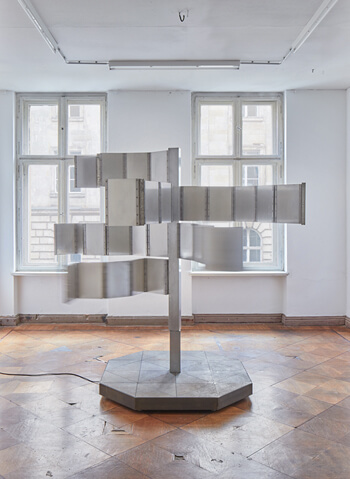 Film of the Artwork 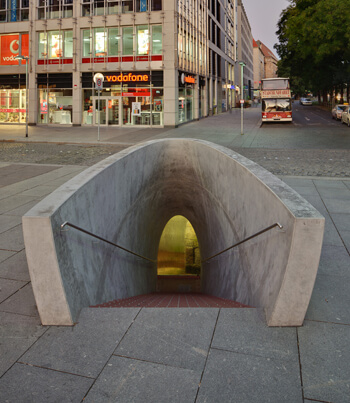 Franka Hörnschemeyer won the 8th mfi Prize with this building project in the centre of Dresden, at the former location of the Seetor, the historic City Gate.
In contrast to the more than five hundred competitors, the artist planned the installation as an underground structure for the most part. It took almost 8 years from the announcement of the competition in 2003, through the approval and planning, to the realization and awarding of the project.

Film on the planning and development of the installation
Koordinaten, 2011
Kunstwegen, Neugnadenfeld

Franka Hörnschemeyer built a construction of formwork elements in the direct neighbourhood of the so-called "Russian Cemetery". The nine modules are firmly anchored in the ground, so that over time they integrate into the forest and are overgrown by plants.
Part of the installation are several audio works that start automatically when the situation is entered. In them, residents of the neighbouring village of Neugnadenfeld tell personal stories that have a concrete relationship to the place and the immediately adjacent war cemetery. 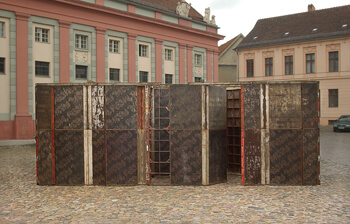 Within the framework of the project, 40 artists had the task and opportunity to take up, reflect and comment on the idea of the "Ideal City". Franka Hörnschemeyer's labyrinth of movable shuttering and grid elements refers directly to the consistent grid pattern of Potsdam's city centre. 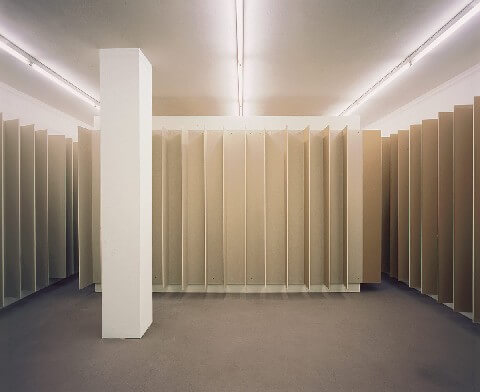 Franka Hörnschemeyer developed a walk-in sculptural work for the exhibition space on Kopstadtplatz. Visitors could walk through a corridor that was lined with movable lamellas made of plasterboard to achieve a "room-in-room" situation at its end.

"Starting point for the project in the WerkRaum. 12 was the intensive observation of the exhibition space, the set-up and dismantling alternating with temporary exhibitions. The unchanging characteristics of the space, its proportions and acoustics, as well as its variable use are questioned in this work."
- Hamburger Bahnhof, Berlin
Peenemünde, 2001/02
At the beginning of the 2000s, Franka Hörnschemeyer started her research on the former military research station in Peenemünde. The series of photographs show the ruins of the military station, which are being reclaimed by nature and only giving an idea of the complex extent of the military past.
Foto: Stephan Erfurt
BFD – bündig fluchtend dicht, 2001
Paul-Löbe-Haus, Deutscher Bundestag (German Parliament), Berlin, 2001
Room sculpture in one of the northern inner courtyards

"The (used) lattice walls are formwork elements used to make concrete cast walls. Assembly locks with the engineering designation "BFD" hold the lattices together. The artist has removed the wooden formlining so that only the metal lattice structure has been preserved. The grids reproduce various parts of the ground plans of the former and present buildings in the Spreebogen area, namely the ground plans of parts of the eastern wall, buildings and dog kennels of the GDR border troops, which have since disappeared, as well as parts of the ground plan of the Paul Löbe House. By an axial displacement, the ground plan elements of the present buildings are interlocked with each other - as it were fatefully interlocked. Thus past and present overlap, the political development of the place is reflected, becomes tangible and comprehensible in the immediate sense of the word.”
Andreas Kaernbach
PSE 900
Lehmbrucksaal, Kunsthalle Hamburg, 2000
October 2000 to January 2006

Franka Hörnschemeyer had realized the work PSE 900 in the Lehmbruck Hall of the Hamburger Kunsthalle as part of the exhibition "Einräumen" in 2000. One of the components of this work was the exposure of the various interior design layers of the Hamburger Kunsthalle. It provided the occasion for the reconstruction of the skylights and the original floor height, which was restored after 2006 and in the process PSE 900 was removed.

Using a construction made of plasterboard and formwork elements, Franka Hörnschemeyer took up historical, no longer preserved building structures from different phases of use of the Werkleitz Gesellschaft's headquarters. The exterior space thus became an accessible labyrinth that visualized the complex interrelationships of different construction and utilization phases.