"(...)Franka Hörnschemeyer makes use of sculptural means that could not be more modest and iconographically restrained - often these are standardized formwork elements from the concrete building, which usually define the built space before its creation and remain invisibly inscribed in its cubature. In many of Franka Hörnschemeyer's works, such elements as mental guidance systems structure the physical space to be rediscovered."
Susanne Altmann, Dresden 2012 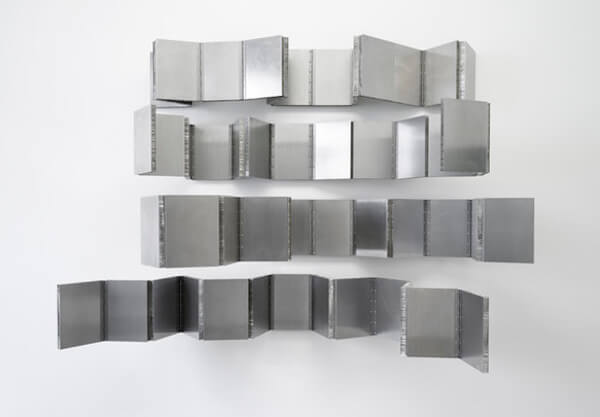 In 1983, the US sculptor Richard Serra and the German photographer Dirk Reinartz met. Since then and until Dirk Reinartz’ death in 2004, Reinartz photographed Serra's landscape installations and sculptures in public spaces all over the world. His precise black-and-white photographs became the basis for the sculpture books that Reinartz produced in close collaboration with Serra, e.g. Afangar, 1991, La Mormaire, 1997 or Lemgo Vectors, 1998, the catalogue raisonné Sculpture 1985-1998. At Art Düsseldorf, Galerie m is showing a drawing by Richard Serra from 1992 with a special dedication "For Dirk - thanks for all the great work", which bears witness to this longstanding collaboration between the two artists. The surface structure of the waxy, black oil crayon on thick handmade paper develops a powerful effect and shows clear traces of the process of creation. Drawings from this period are now rarely available. 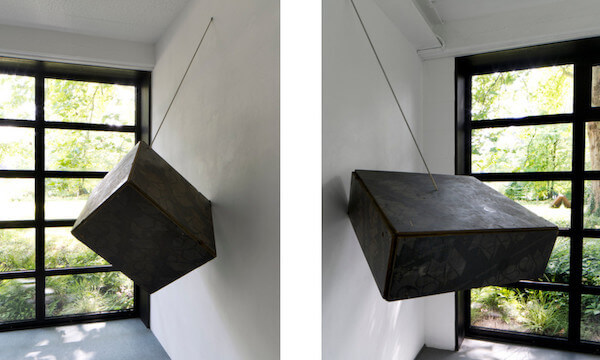 "Colour has an optical effect. For example I can coat the entire canvas with blue, red or green. But sometimes I need that haptic quality, for the paint to become 3- dimensional and thicker when applied. Then I become keenly aware that it is also a substance, a mass. That it is a body, that the colour has a body. Then there is this chiaroscuro effect, of light and shadow. It is far more nuanced when I do it in 3-D" (Kuno Gonschior) 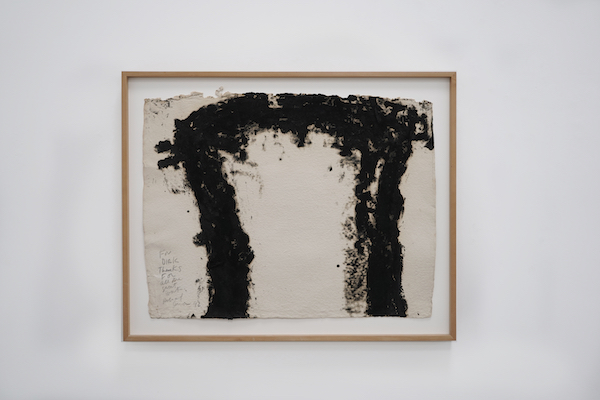 Already in his early work groups, Perrodin explored proportional relationships, serial and variable aspects, geometry and asymmetry. At the same time, the formal multiplicity of his objects and object groups can be traced to a systematic basic concept stemming from clear-cut, mathematical rules. His works all revolve around the same conceptual core, spiraling in ever closer, series by series, work by work, each defining it more precisely in its own way and using its own method.
Kuno Gonschior
Ohne Titel, 1986
oil on canvas, 120 x 100 cm
Evelina Cajacob

Evelina Cajacob's (*1961 Sumvigt, Switzerland) drawings call to mind loops, waves, and twisted knots. Forms made up of filigree lines seem to twist endlessly into themselves and each other. Delicate hatching creates floral structures or transforms the shapes into biomorphic, almost organic-seeming entities that meander across the paper.
Evelina Cajacob works with drawings on paper and directly on the wall, video and installation. Perception and time play a decisive role in her work, as they have inscibed in the process of the delicate and sophisticated art work itself. That process transfers to the observer by taking a close look. The complex art work creates a wide space for interpretation while reducing material and technique. 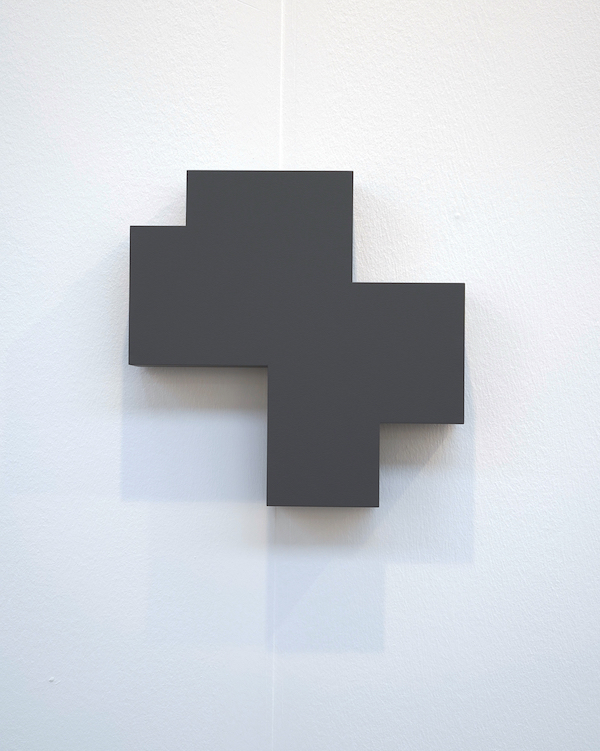 The multimedia and conceptual work of Tanya Poole, a contemporary artist based in France, combines different media in her bodies of work that focus on societal groups, individuals and relationships. A main part of her oeuvre comprises large-format paintings with Indian Ink that are unique in their size and the use of coincidence and masterly control of the medium. The monumental paper works evoke a stunning spatial impression and immerse the viewer. 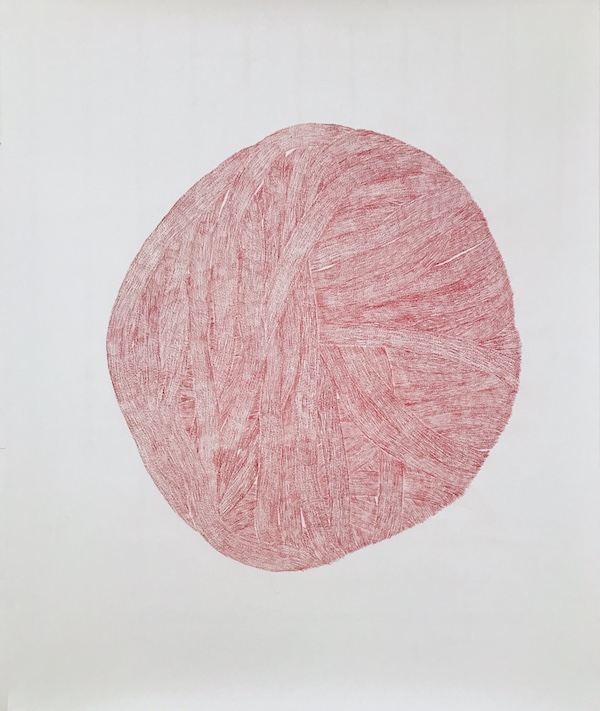 Lena von Goedeke's works are accomplices and ambassadors of nature. They show nature, as landscape, mountains and sea, sand and rock; they orientate on nature, imitate her copious faces, like the sparkle of ice, the warmth of wood or the brittle draught of rubble; they tell about nature, about her unrestrained firmness und disarming beauty; they mediate between her and the beholder, while not withholding the great distance that has forced itself between him and the uncharted territory that is left on earth.

The Berlin based artist Antje Dorn confronts us with situations and constellations from our everyday life. Dorn toys with our viewing habits by changing the context of certain pictorial elements and materials, thus allowing us to see them with new eyes. 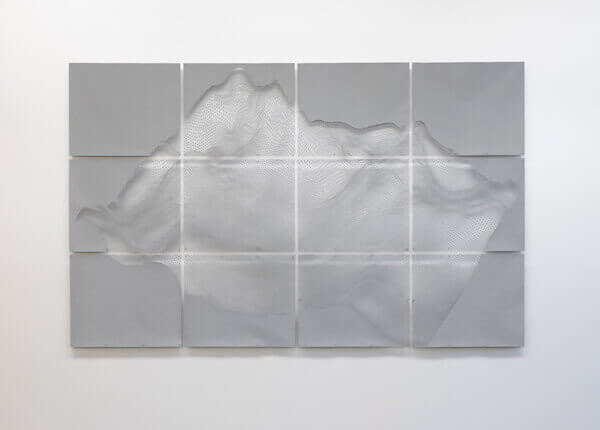 The works in the series MINERAL LOGIC are made out of the mineral muscovite. The structure of this natural raw material consists of paper-thin layers that can be separated off from the mass. MINERAL LOGIC showcases the surprisingly aesthetic impact of this material, which is used in industry as an extremely heat-resistant insulation material for high-voltage power lines.
Antje Dorn
Loop, 1997
acrylic on garden hose, variable installation
Simone Nieweg

The photographer Simone Nieweg lives and works in Düsseldorf and studied at the Kunstakademie Düsseldorf as a master student of Bernd Becher. Since the early 1980s, Simone Nieweg has been exploring gardens, landscapes, trees and forests in her pictures, which she traces in her regional environment and on journeys at home and abroad. Her concentrating gaze finds an aesthetic situation within the grown structure, which Nieweg calls "perfect coincidence". She translates reality into a composition in which structures, lines and colours shape the image. Nevertheless, the tension between the structured composition of the photographs and the relative anarchy of the gardens and landscapes remains. Her large-format prints can be found in numerous public collections, including the Kunstsammlung NRW. 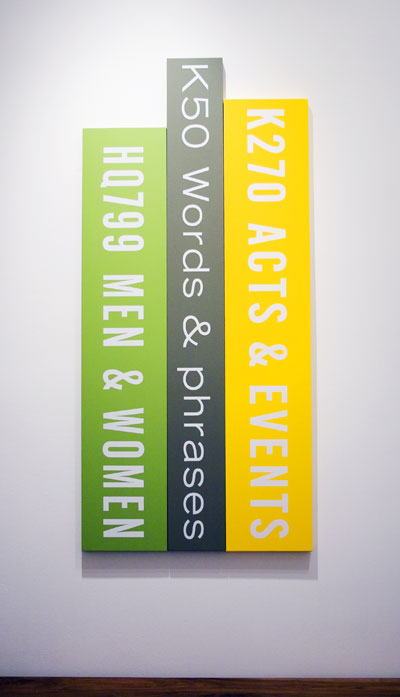 Lucinda Devlin (*1947 in Ann Arbor, MI) works exclusively in series. After devoting her attention to specific interiors in her early career, she embarked in 2006 on an intensive engagement with agricultural and lake landscapes. Her square, generally axially symmetrical photographs generate typologies of the marks left by humans on the environment, expressed in the Lake Pictures in a minimalist, almost abstract formal language. The subject of the over 60 photographs is one of the largest lakes in the USA, Lake Huron in Michigan, on the border of Canada. Devlin has a house on the lake, from where she photographically recorded her observations of its many moods between 2010 and 2013. 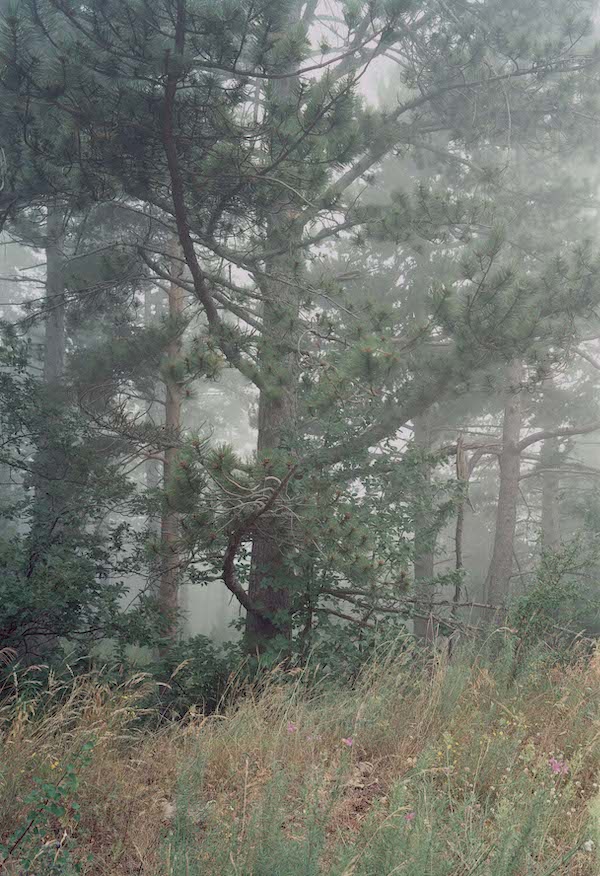 The German-American artist Evelyn Hofer (1922-2009) is considered one of the foremost female photographers in recent history, and her works still captivate us today with their intensity and clarity of form. Over a period of nearly 50 years, the photographer pursued her métier as a kind of artistic sociological research.
Harald Kunde, Marion Bornscheuer und Peter Pfrunder in the forward of the catalogue "Evelyn Hofer. Encounters", 2019) 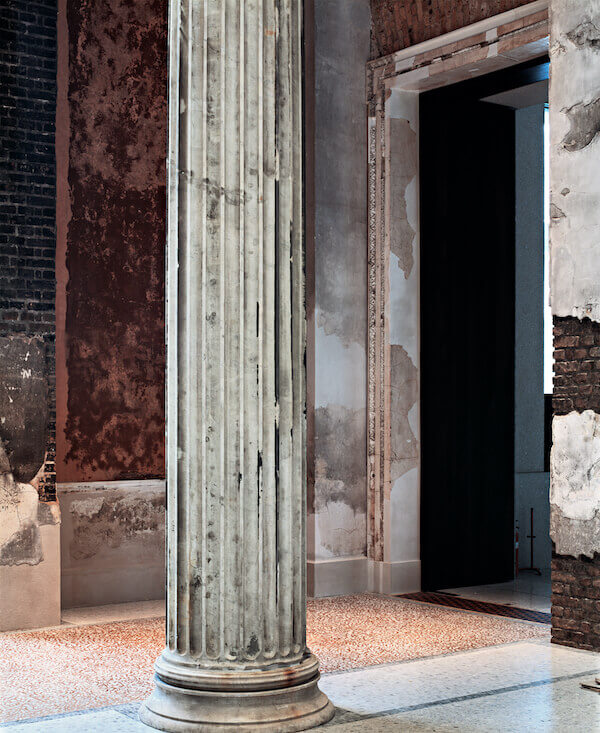 The colourful still lifes belong to Evelyn Hofer's latest serial. They were photographed in Hofer's NY studio in the mid 90s. At first glance one may behold a 17th century painting. In front of a velvety black background commodities, plants, and fruits appear in rich colour, impressively detailed and in a brilliantly plastic and real manner Even though the works are mere photographies, the compositions are illuminated artisticly and the texture of the objects are in the same tactile quality as the oilcolours of the old masters. Besides Evelyn Hofer's effort, her time and patience, this effect can be ascribed to the Dye Transfer technique and a 19th century photographic lense Hofer used. 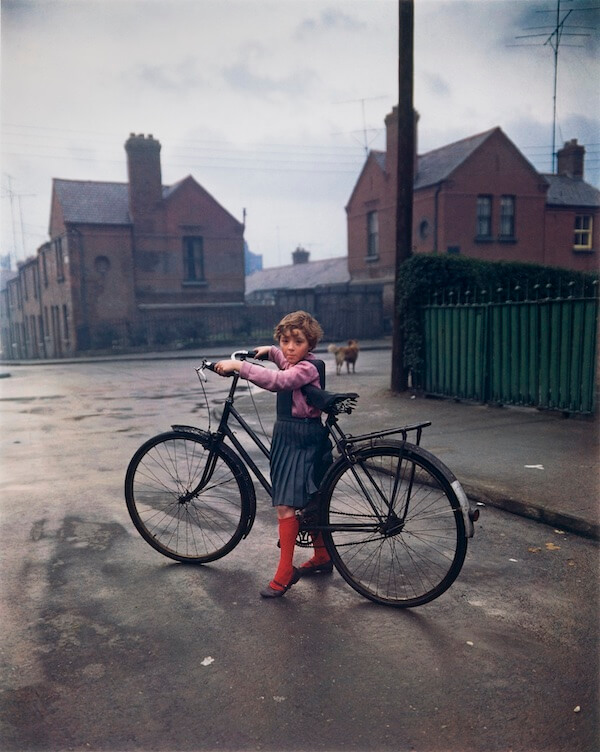 Anja Bohnhof has been travelling to India frequently for over 10 years. Since then, Bohnhof has created the series books for sale, 2019/18, Bahak, 2019/18 and Krishak, 2019/18, among others, in the streets of Kolkata and on the rice fields of West Bengal. They ask questions about the social content of history, reality and identity.

Information about her latest series The Last Drop, 2019 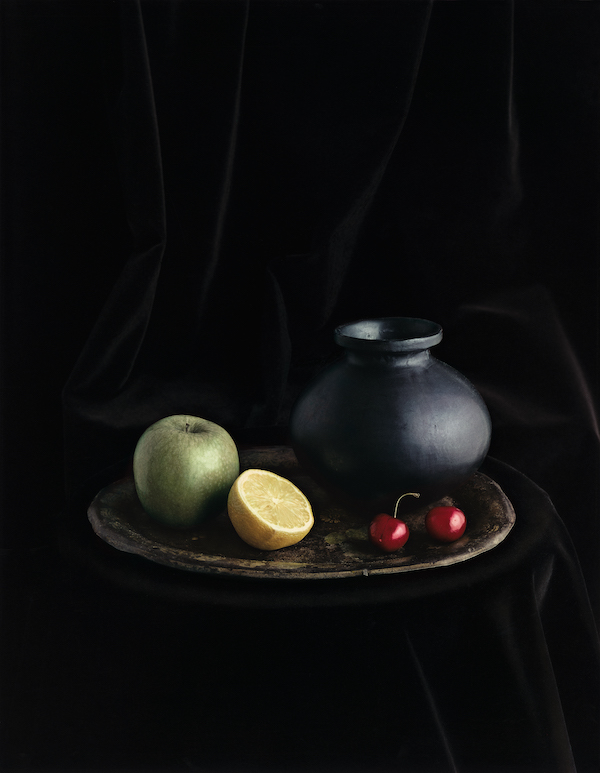 For her series The Omega Suites photographer Lucinda Devlin entered from 1991-1998 two thirds of the prisons in the United States which carry out the death penalty and photographed the unoccupied execution chambers within. The photographs are part of a logical progression of projects exploring the intimacy of the body in relation to procedures, whether medical, judicial or therapeutic, which require varying degrees of passivity from the participants.

In 1994 Reinartz published the photo-documentary deathly still, a pictorial analysis of the Holocaust that evokes memories of that tragic era while prompting reflection on present-day conditions. He took the photographs over a period of eight years in 26 former German concentration and death camps. In observing these images of what the sites look like today, our sense of alienation comes not so much from the immediate immanence of the motifs themselves, but rather from the ordinariness and apparent meaninglessness of woods, fields, roads and overgrown walls that were once mute witnesses to unspeakable horrors. Our sense of unease comes from knowing that these scenes were photographed in concentration camps, with all the associations thus evoked. Deathly still was exhibited for the first time in 1994, at Galerie m Bochum, and has since been on display in more than 25 museums all over the world. A book of the same name was published by Steidl Verlag, Göttingen.
Lucinda Devlin
Electric Chair, Holman Unit, Atmore, Alabama, 1991
from the series The Omega Suites
Chromogenic Print
74 x 74 cm (100 x 100 cm)
Ed. 8 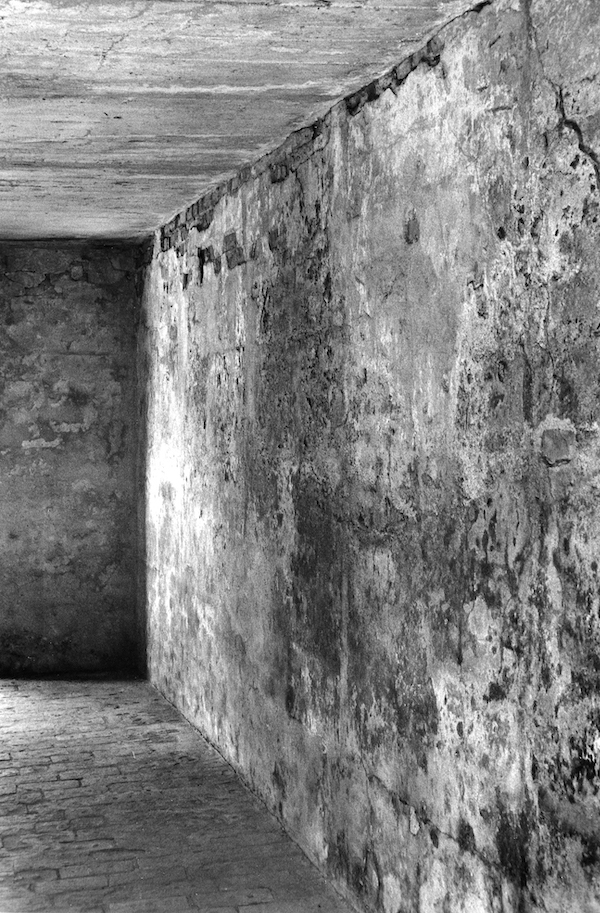